The FCA collects complaints data from firms to enable us to monitor:

We use the data to help assess how well they are treating their customers and how firms’ performance changes over time.

This publication analyses the aggregate complaints data and will specifically cover the following topics:

Complaints handling and the amount of redress paid to customers:

In April 2017 the FCA’s biannual complaints publication will change. This is when our new rules on improving complaints handling come in, which improve how we report and publish complaints (see PS15/19: Improving complaints handling, feedback on CP14/30 and final rules). The publication will provide a new, fuller data set. Although it will not be comparable to historic data we published, the new data set will be more informative for consumers and industry (e.g. it will include figures putting the number of complaints into context in relation to the size of each business), and will give us better intelligence.

We also aim to begin publishing a new section for consumer credit related data once all firms are authorised and submitting their complaints data to us.

For more information on the new complaints return which firms use to report their data to us, please refer to our Handbook. 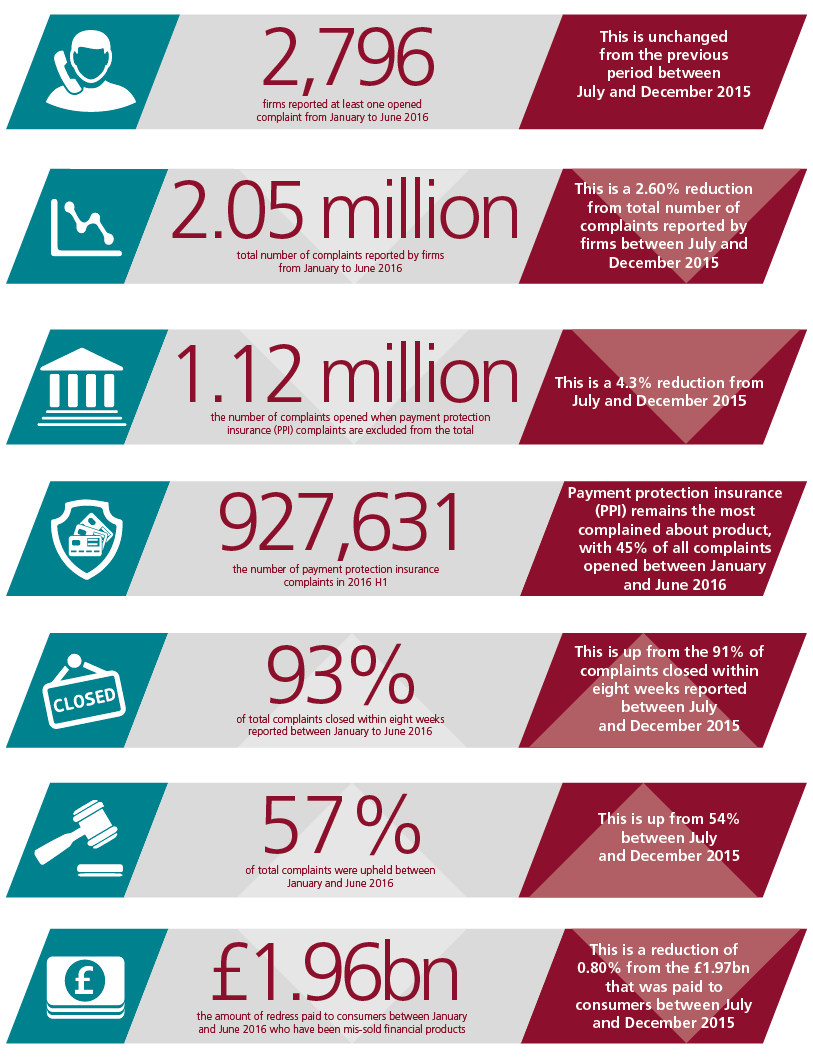 The total number of complaints opened

Opened complaints by product type (Table 2.1 and 2a)

Payment protection insurance (PPI) remains the most complained about product, with 927,631 complaints reported between January and June 2016. As such, PPI still accounts for 45% of all complaints. Excluding PPI, total complaints have decreased by 4% since the second half of 2015 to 1.12m. PPI is more than double the next most complained about product, current accounts, which received 407,954 complaints over the same period. However, out of all the reported products, current accounts have seen the largest reduction in complaint numbers – decreasing by over 46,000, or just over 10% – since the second half of 2015.

We classify complaints into five product groups. Figure 2 shows the proportion of complaints in each group and the top products complained about. 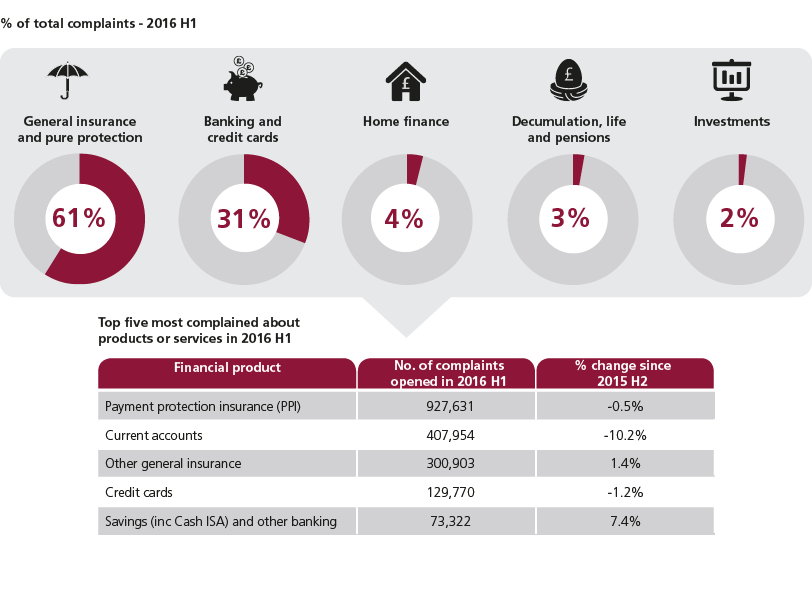 Figure 2: Complaints broken down by product type and the top five most complained about products or services in 2016 H1

The number of opened home finance product group complaints remained mostly unchanged since 2014 H2 at 76,137. The general trend from 2010 to 2014 had been growth in the number of complaints and they are still 31% higher than in 2010.

For more information about the volumes of home finance business across the sector, which can be used to add more context to the home finance complaints figures, please see our Mortgage Lending Statistics.

The number of complaints related to the decumulation(a), life and pensions group of products has been variable but on a general downward trend since 2010. Firms reported 56,629 opened complaints in 2016 H1, representing a decrease of just over 9% when compared with 2015 H2. 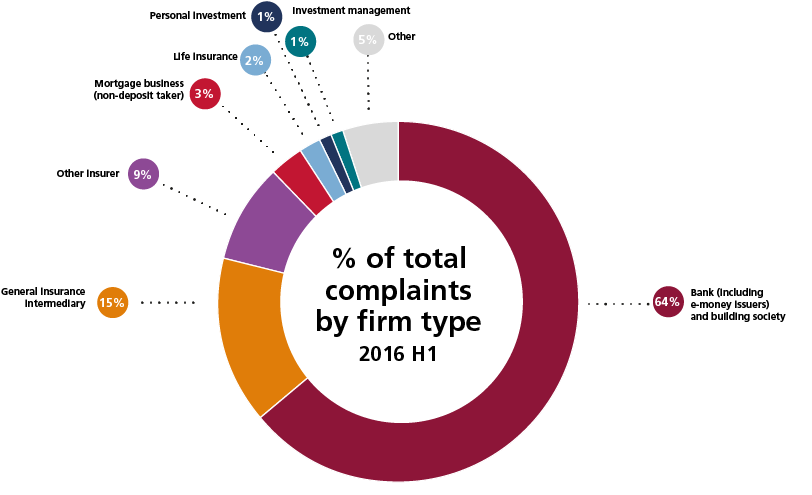 Complaints by cause (Table 2.3) 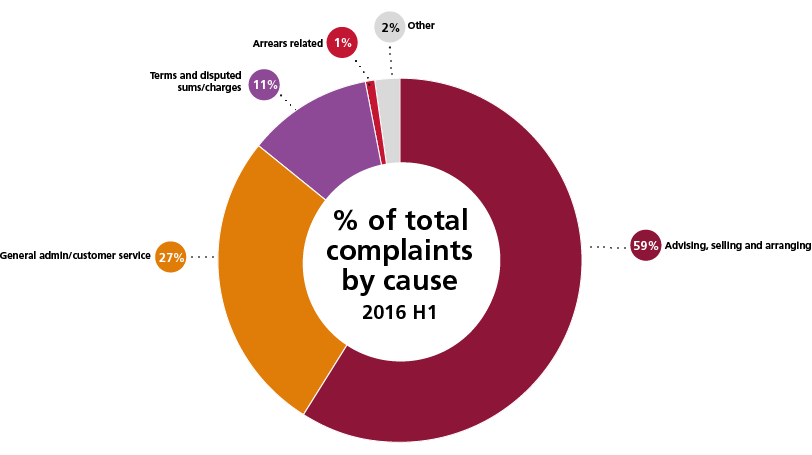 Figure 4: Percentage of total complaints opened by cause

Advising, selling and arranging issues account for 59% of the total complaints received in 2016 H1 and are the main cause of complaints. This is mainly due to the general insurance and pure protection product group, which includes PPI.

Complaints handling and the amount of redress paid to consumers

When consumers make complaints against firms we expect those complaints to be handled properly and resolved fairly and effectively. We have identified a few instances of significant failings in the way certain financial products were sold. This led us to work with firms to ensure complaints are handled appropriately and consumers are appropriately redressed. In recent years this includes failings in the sales of PPI and interest rate hedging products (IRHPs) and substantial redress relating to these products is still being paid.

Figure 5: Percentage of complaints closed within eight weeks by type of product

Figure 5 shows the number of complaints closed within eight weeks of being opened. These are split by product category. There is a downward trend across most product categories (except for general insurance and pure protection, which includes PPI) since 2013 to the end of 2015, followed by an increase in 2016 H1.

Prior to 29 June 2016, we did not require firms to submit complaints data for complaints that are resolved by the end of the following business day after they are received. This rule is set out in our Handbook at DISP 1.5. From 30 June 2016 the rule changed so that all complaints become reportable and the new data should therefore feed into the next complaints data publication due in April next year. The amendments to DISP 1.5 were discussed in Policy Statement 15/19.

The data in this publication do not cover complaints against firms authorised only to carry out consumer credit related activities. We will not publish data for these firms until after March 2017 when all firms carrying out these activities are authorised and are reporting their complaints data to us. Please see the consumer credit pages on our website for more information.

(a) ‘Decumulation’ means the conversion of pension assets accumulated during working life into pension income to be spent during retirement.