This is the third report into cash savings account rates under our sunlight remedy, following our first publication in December 2015 and second publication in July 2016.

This remedy aims to bring to light firms’ strategies towards their longstanding consumers. As such the data displays the lowest interest rates available on open and closed easy access savings accounts and easy access cash ISAs as at 1 October 2016. This is our third and final publication in this trial.

In our cash savings market study we found that accounts opened a long time ago pay lower interest rates than those opened more recently. Despite this, we found that a significant number of consumers do not move their money to accounts that might pay more interest – even with the same provider.

We asked firms to tell us the lowest possible rate that consumers could earn across all of their easy access savings accounts and easy access cash ISAs. This means that, for example, where the rate of interest paid on an account is lowered when withdrawals are made in a given period or the balance falls below a certain amount, we present the lowest rate that could be paid.

We are publishing this information to raise awareness of firms’ strategies towards their longstanding consumers, and to allow a comparison between open and closed accounts. This should also encourage firms to offer better value products to existing consumers, especially those firms with products no longer on sale.

The information shown reveals differences in the rates firms have on offer on different accounts. While we recognise that firms offer a range of accounts and the lowest rate that a consumer could earn is only one part of a bigger picture of firms’ treatment of their consumers, it does show that some consumers could be better off by choosing a different account.

We have called this publication the ‘sunlight’ remedy because we are shining a light on interest rates that are not prominently displayed, but that may be earned by some consumers. These consumers stand to lose out by not switching to a different account.

This information is targeted at market commentators, consumer groups and the media. Although some individual consumers may read this information, we have not published it as a direct tool for shopping around. This is because the lowest possible rates we are publishing do not necessarily reflect the typical rate that a consumer is earning. Some products offer different rates of interest where, for example, consumers meet different conditions or according to the consumer’s account balance, which might mean a higher rate of interest is paid.

Price comparison websites, on the other hand, provide tools to compare the best interest rates from certain providers and play an important role in many consumers’ choice of savings accounts.

We collected information on the lowest interest rates offered on easy access savings accounts and easy access cash ISAs by the 32 largest providers (totalling 39 brands). We asked these firms to provide a breakdown of accounts that can be managed in their branches and those than cannot.

As set out in PS15/27 we are publishing information on firms’ lowest interest rates on a trial basis for 18 months. This is the third report following our first and second publications in December 2015 and July 2016 respectively.

Following the trial period we will evaluate our approach and assess the impact of publishing this information on firm behaviour and consumer outcomes. If this remedy is found to be effective we will consult on whether the publication or similar should be undertaken on a more permanent basis.

The interest rates reported for both open and closed accounts range from 0% to 1.50% (see tables A and B below). Even when comparing the lowest rate presented by providers of these products, some consumers could be better off by opening a different account.

Based on the interest rates reported by firms:

As this is our third and final publication we have also published charts showing the evolution over the 18 month testing period (1 May 2015 to 1 October 2016).

Tables A and B, above, identify that in general open account rates tend to be higher than closed accounts rates. This is similar to the results at 1 October 2015 and July 2016 where open accounts rates were significantly higher. The interest rates reported ranged from 0% to 1.50% (see tables A and B above). This compares to a range of 0% to 1.75% at 1 October 2015. This is, of course, set against a backdrop of the Bank of England base rate being lowered from 0.50% to 0.25% in August 2016. 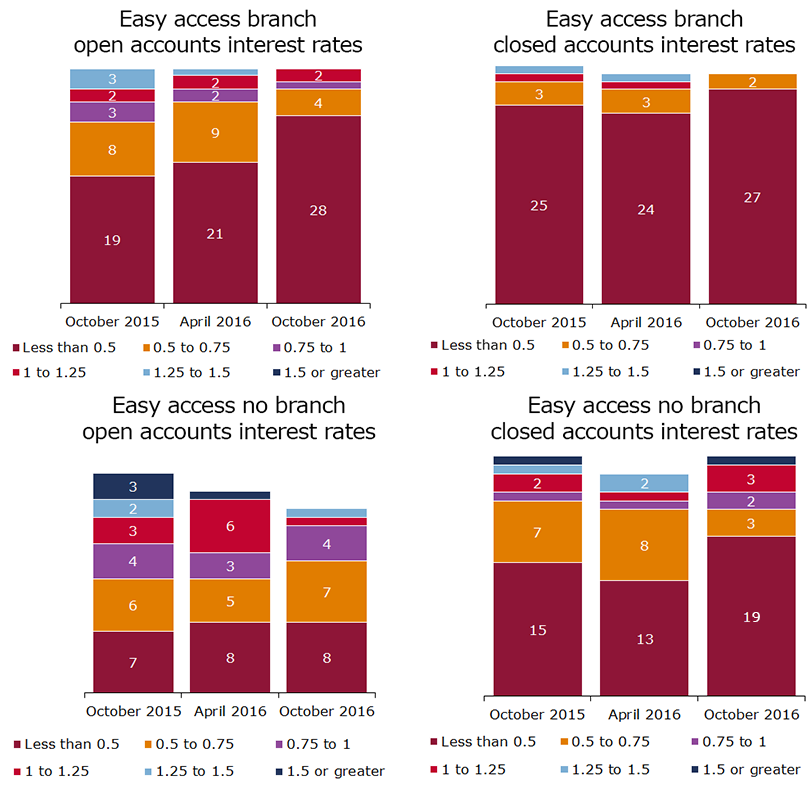 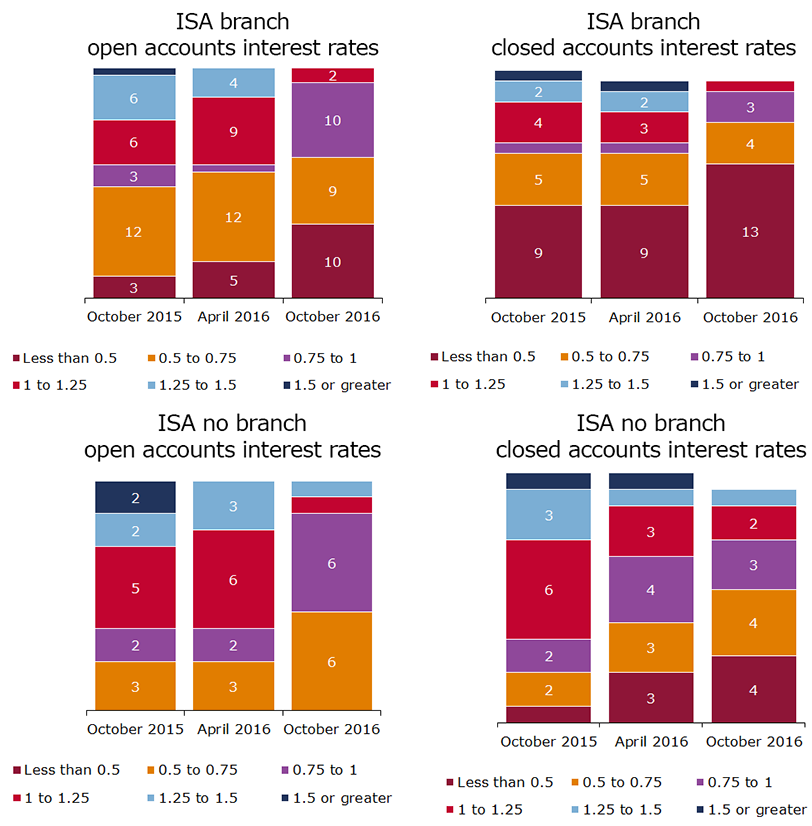 *Any range in a table not containing a number represents 1 account.

As explained in the notes to the tables, the interest rates shown are the lowest rates firms pay on accounts that do not have:

As this is our third and final publication we have begun to evaluate the trial. We continue to be concerned about the treatment of longstanding consumers. As part of our evaluation we will consider what other regulatory tools are needed to achieve more effective competition.

We have also published our response to the Competition and Markets Authority investigation into retail banking. In this response we announced our intention to take action on its recommendation that we should publish objective indications of service quality. We will evaluate the sunlight remedy pilot and align our findings with other potential service quality indicators.

If a firm or commentator has questions on the sunlight remedy and our work they should contact us at [email protected].