Our research shows that most credit cards have a complex combination of features, fees and interest. Find out more about the key features of this market.

Credit cards have many useful functions including:

Some consumers use credit cards as a way to build their credit histories.

Alternatives to credit cards include charge cards, which are like credit cards but whose balance must be paid in full monthly.

Another alternative is a store card, which can only be used with a particular retail group, unlike credit cards which are widely accepted. They typically have lower limits and provide rewards for spending with that retailer.

Debit cards can be used in similar ways to credit cards when they draw on an overdraft. We have also published findings from our research into overdrafts.

Some cards are aimed at specific consumer groups. Some give rewards for use, such as cashback on purchases.

There are also ‘low and grow’ or credit builder cards aimed at subprime borrowers or those with little or no credit history. These start with a low limit that is gradually raised as the borrower proves their credit-worthiness.

Credit cards are also an important means of payment. A range of different firms play a role in relation to credit card payments: 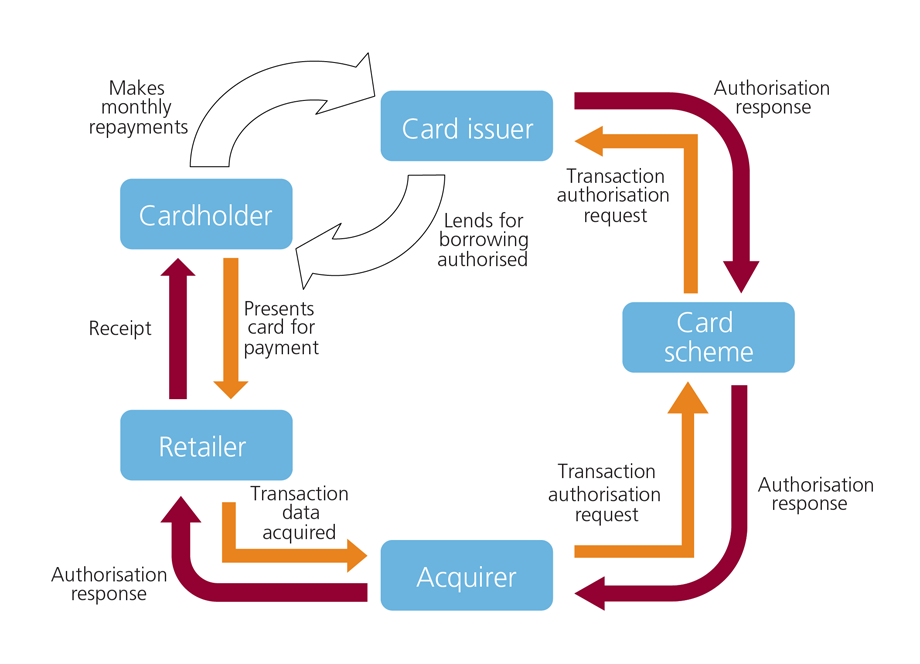 Actions that affect payment services and systems, including the possible cap on interchange fees, may have an impact on dynamics in this market.

UK adults borrowed £150bn on credit cards in 2013 (Bank of England) . Though a large amount, much of this debt was repaid within the year and a large amount of it was on purchases that were paid off without incurring interest.

Currently consumers owe £56.9bn in credit card debt (Bank of England). Around 40% of this debt incurs no interest (UKCards), from consumers who pay off their balances every month and from those on 0% balance transfer and 0% purchase deals.

In 2005 there was a dramatic change, repayments increased significantly, leading to a fall in credit card debt. Between 2005 and 2012, gross lending was flatter though net lending remained generally positive, although much lower than it had been before 2005.

The large increase in credit card write-offs following the crisis, as lenders tightened credit conditions and cleared the worst performing card debt from their loan books, led to some falls in balances outstanding.

Since mid-2012, net lending has grown. With the level of write-offs continuing to fall, the balances outstanding have also begun to grow again.

With the more positive economic outlook and the continuing squeeze on household finances, we expect this growth in credit card debt to accelerate.