This is an overview of geographical cash access coverage in the UK at the end of the third quarter (July to September) of 2021. This is the third in a series of regular updates to monitor coverage over time.

This is an overview of geographical cash access coverage in the UK at the end of the third quarter (July to September) of 2021. This is the third in a series of regular updates to monitor coverage over time.

On a quarterly basis, with the Payment Systems Regulator (PSR), we gather and update data on access to cash. This captures the locations of cash access points and other relevant information like: temporary closures, opening hours, and accessibility. This data covers brick-and-mortar, mobile bank, and building society branches, automated teller machines (ATMs), and the Post Office network. We supplement this information with annual data on cashback locations.

This analysis provides insights on the proportion of the population that lives within a range of distances of various cash access points. We measure distances as the crow flies (see note 1), consistent with the approaches adopted by LINK and the Post Office. Our latest analysis uses mid-2020 population estimates, updated from mid-2019 estimates (see note 2).

We estimate that for access to any bank, building society, Post Office branch, or any ATM (either free or pay-to-use):

These coverage estimates are unchanged from 2021 Q2. However, the types of available access points have changed between Q2 and Q3:

Including cashback as a source of cash alongside all other access points, we estimate that, either with or without pay-to-use ATMs:

Due to substitutability, as outlined above, type B branches are only included in groups 6, 7, 10, and 11.

Estimated percentages of the UK population living within a given distance from a cash access point are shown in Table 3 (see notes 6, 7, and 8). The estimates are given for the UK regions separately, as well as for England and the UK overall. Estimates for rural and urban areas are also given (see note 9).

Table 3: Percentages of the UK population that have access to a source of cash within a given distance as of 2021 Q3 (Groups 1-14)

Figure 1 shows the coverage areas underlying the population estimates in Table 3. As in Table 3, the cash access points considered are those in groups 1-14. In each case the areas shown are those without access to a source of cash within 1, 2, 5, 8, or 16 km. The areas shown in white have a cash access point within 1 km or nearer. The interactive tooltips show percentages of the Local Authority District population that have access to a source of cash within the above range of distances.

View the maps in Tableau Public

About 14% of type A (larger PCA providers) and 9% of type B (other) bank and building society branches were temporarily closed for at least 1 day during the third quarter of 2021 due to coronavirus (Covid-19) and other reasons. Of branches which had temporary closures of at least 1 day, a typical (median) branch of type A or B was closed for 3 and 2 days respectively, with the average number of temporary closure days across type A and B branches being 7.

We do not have equivalent information for Post Office branches.

While external and stand-alone ATMs are always accessible, in-branch cash withdrawals and deposits and other banking services are only available during branch opening hours.

At the end of the third quarter of 2021, 86% of type A and 58% of type B bank and building society branches were operating on reduced hours compared  to the normal opening hours (in February 2020) before the first lockdown.

Figure 2 shows the percentages of branches open at a given time between 7am and 7pm, Monday to Saturday (see note 10), by branch types defined in Table 1. This illustrates a substantial improvement in opening hours since March 2021. For example, around 92% (87% in Q2) of type A (larger PCA providers) branches remain open after 2pm Monday to Friday, and over 74% (70% in Q1) after 3pm. On average, type A and B branches are open 35 hours per week There were only slight changes in opening hours of Post Office branches from Q2 to Q3. 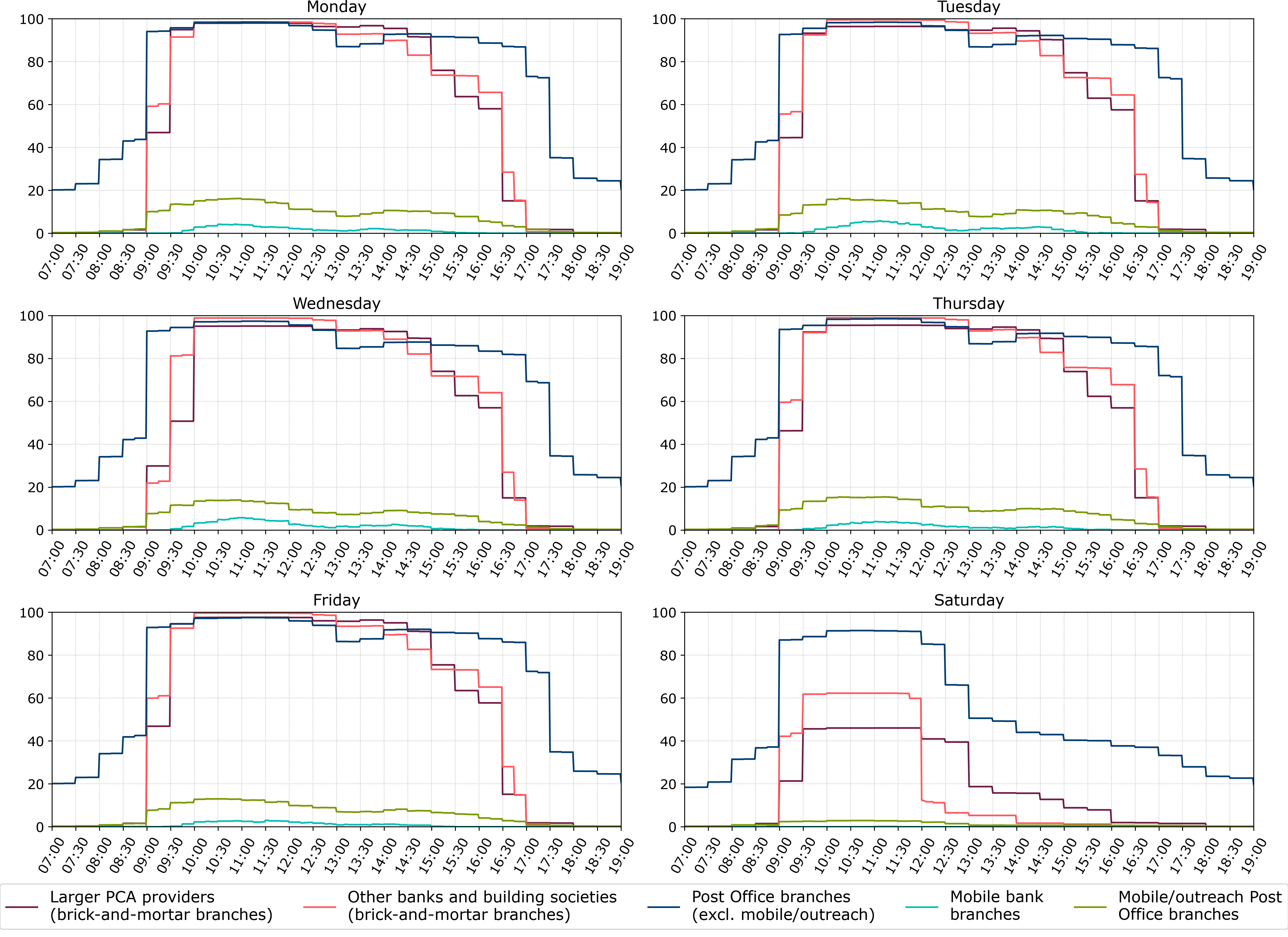 For some consumers, being able to use branch services depends on accessibility features.

Of the brick-and-mortar bank and building society branches, 62% of type A (larger PCA providers) and 54% of type B (other) branches have all 3 characteristics. Excluding the branches for which some values are unreported, these percentages become 87% and 75% respectively. 78% of Post Office (excluding mobile and outreach) branches have both wheelchair and a hearing/induction loop. This increases to 100% if we exclude branches for which some values are unreported. We do not have information on step-free accessibility for Post Office branches.

In addition to the data collected from banks, building societies, and the Post Office, the analysis uses other open data and data licensed under the Public Sector Geospatial Agreement.