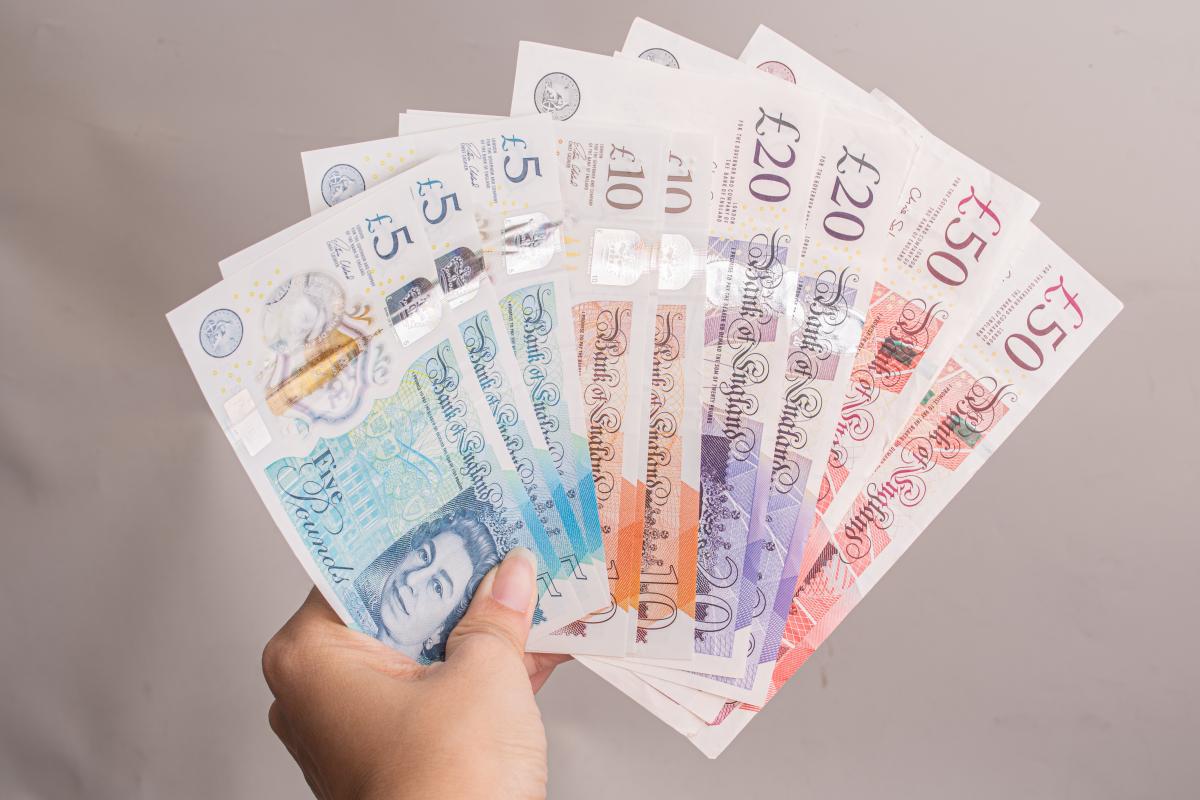 Where to Withdraw: National Mapping of Access to Cash

Where to Withdraw: National Mapping of Access to Cash

The total number of cash machines and bank or Post Office branches is a useful but crude measure of access to cash. Our project, reported on Insight in October, set out to examine the detail. Cash may be accessed via ATMs and in branches (banks, Post Offices, and building societies) but also through cashback from some retail outlets. ATMs – where the majority of cash withdrawals are made – can be free-to use (FTU) and pay-to-use (PTU), located inside bank branches or a variety of shops, on the walls of bank branches and Post Offices, or in transport hubs.

Where you live could determine what your nearest source of cash is, how accessible it is and whether you have to pay for it.

A key aim of the project was to measure and map the distances to points of cash access. We have measured distances ‘as the crow flies’, both from neighbourhoods and areas of economic activity - retail centres, major high streets and supermarkets. This allows us to see how close current access to cash may be to either where people live or where people are most likely to use their cash.

In total, our dataset contains over 113,000 cash access points. The make-up of these is shown below. 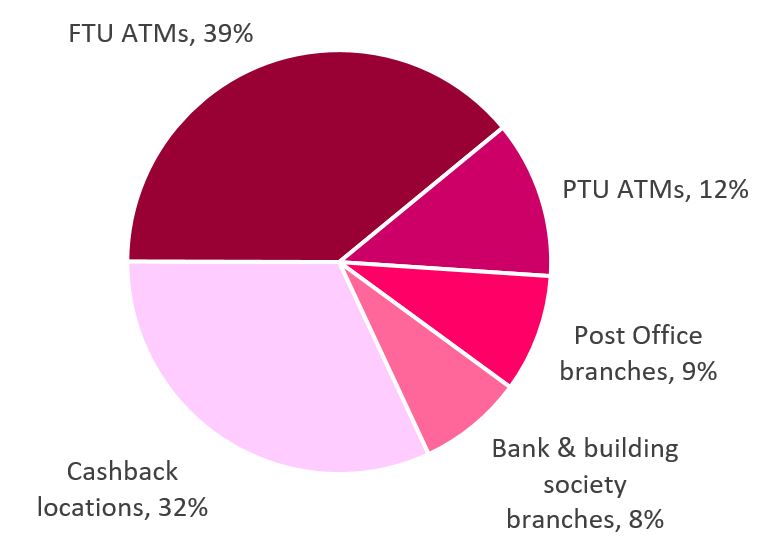 Almost all (99.7%) high streets have a cash access point within 500m, with a mean distance of 67m. If we exclude cashback and PTU ATMs, this figure drops slightly to 98.3% and the average distance increases to 113m.

When we measure from neighbourhoods – i.e. where people live rather than shop – we find that 81% have a cash access point within 500m, rising to 93% within a 1km radius. That access drops if we consider only FTU ATMs and bank, building society and Post Office branches, falling to 68% within 500m and 90% within 1km.

We also analysed the type of cash access point. We found that cashback and FTU ATMs tend to be closer than other types of cash access points. This holds true for both high streets and neighbourhoods. However, the percentages differ considerably (97% of high streets have at least one FTU use ATM or cashback location within 500m, while just over 60% of neighbourhoods do). 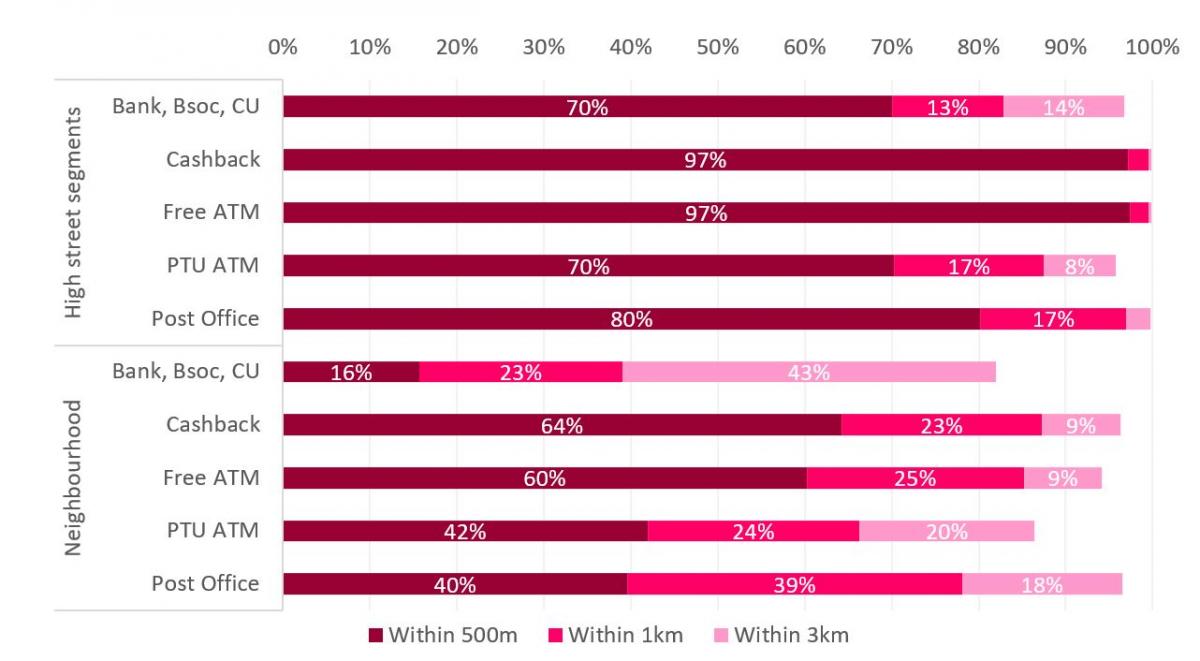 Mapping free access to cash, including cashback, across the UK illustrates that most consumers have access to cash within 1km (93% of the population; just over 1.5% of the population have no access within 3km). Urban and densely-populated areas are, on average, closer to a source of cash compared with rural areas. For example, the average distance in London is 326m, but in rural regions such as Scotland, the South West and Wales, this is more than 600m and some areas are much higher. The figure below shows this is especially the case in some of the most remote parts of the UK. Although we do not have the data to assess this, the impact of these distances could be higher if we were to consider the actual time it takes to travel such distances.

Our analysis has identified the important role of Post Office branches in providing access to cash in rural areas. In 51% of rural neighbourhoods, the nearest cash access point is a Post Office. This also means that rural areas have more limited availability of access to cash outside standard opening hours. Our analysis identified that on Sundays, because of Post Office and bank branch being closed, people in more than one-in-five (21% of) rural neighbourhoods have to travel at least an extra 1km to access cash. 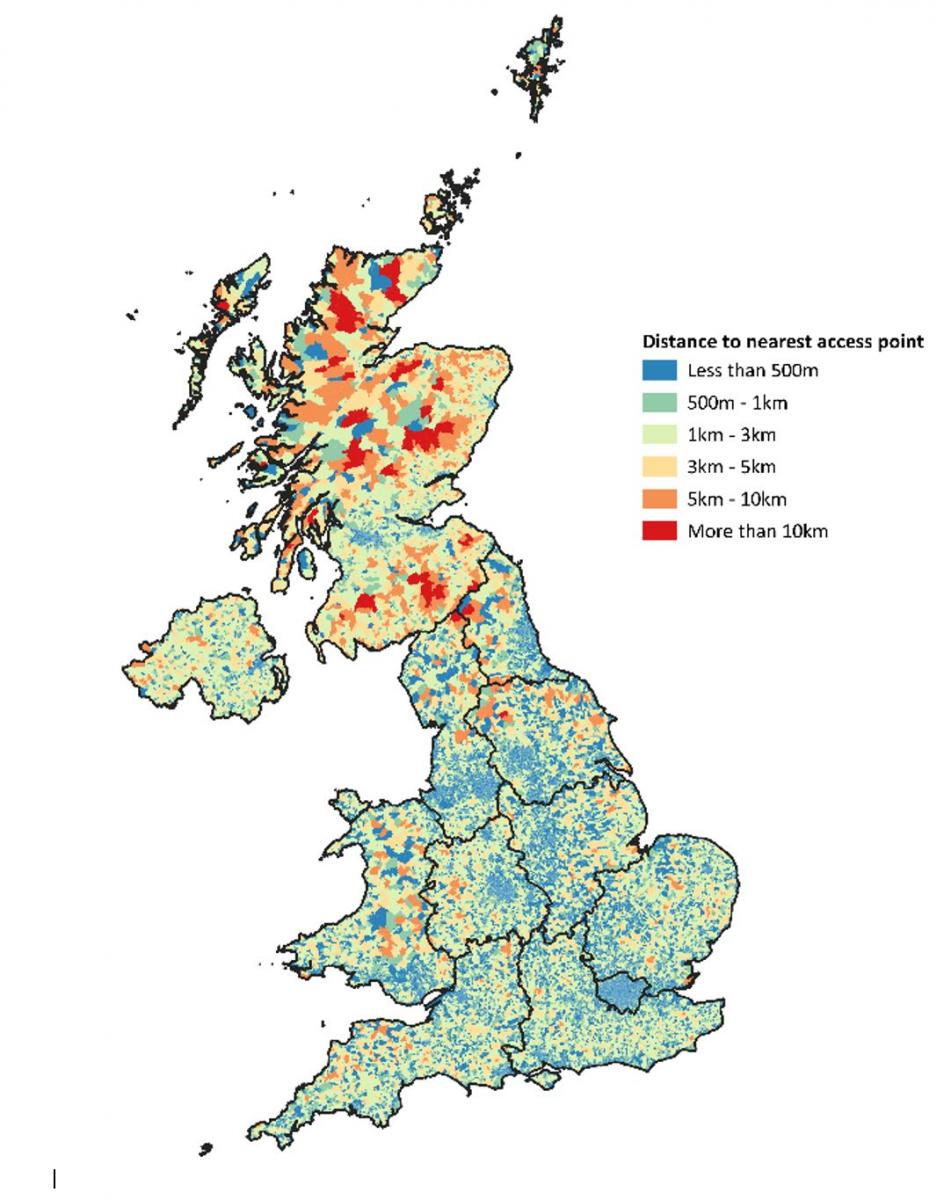 In addition to measuring distances, we were also interested in understanding similarities and differences between neighbourhoods. To do this, we conducted a cluster analysis to assign neighbourhoods to different categories, based on the distance to free cash access points (i.e. excluding cashback and PTU ATMs).

A second interesting cluster of neighbourhoods (86% of which are urban) has somewhat distanced, but abundant access to cash. For these neighbourhoods, the distance to the nearest access point is on average nearly 800m, but they tend to have a choice of different type of access points within around 1-1.5km.

Geographical distribution of neighbourhood clusters across the UK 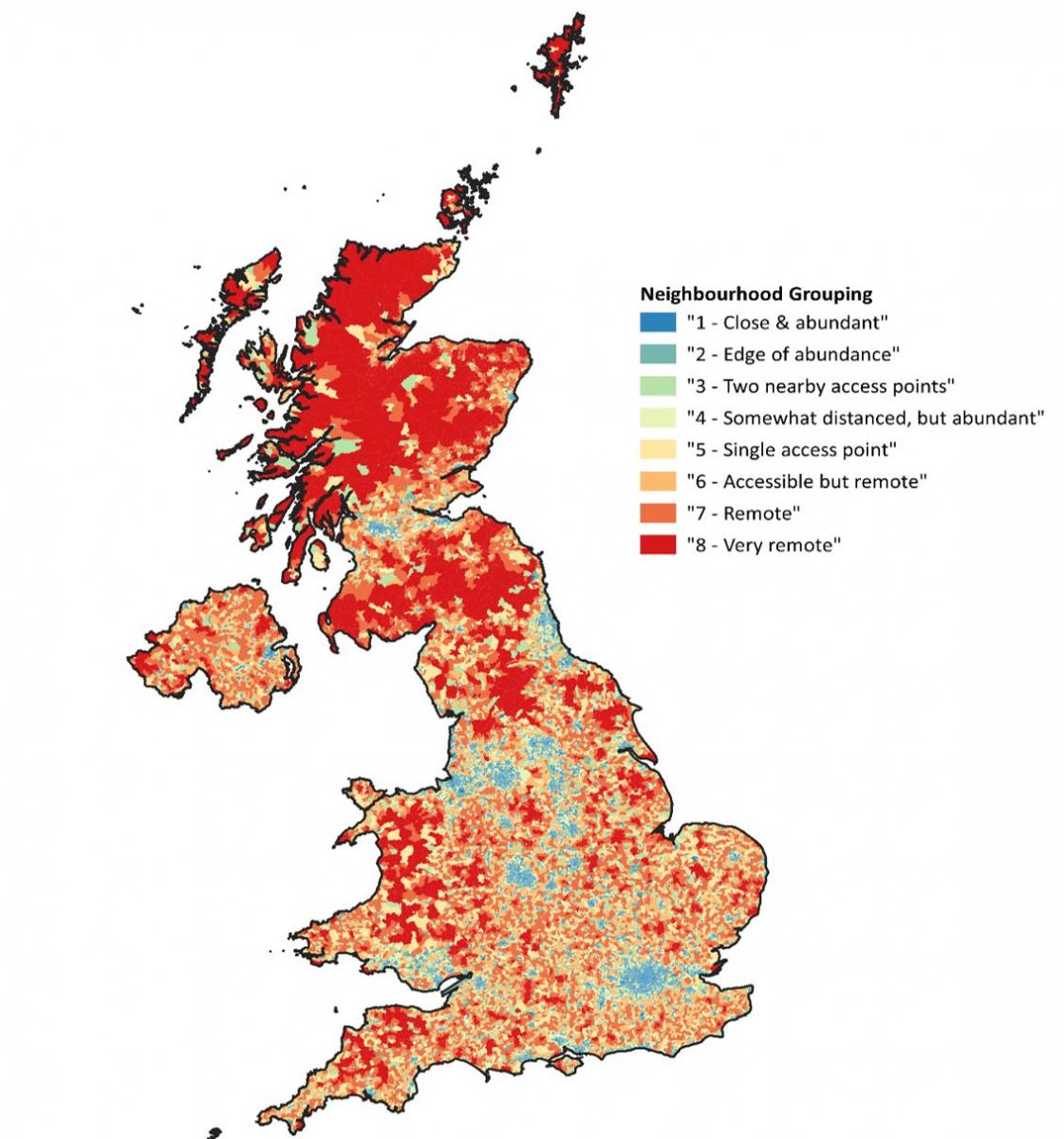 We have explored changes in the numbers of FTU and PTU ATMs using data from March 2018 to March 2020, before the start of the Covid-19 lockdown.

The total number of free cash access points (excluding cashback) has declined by 15% over this period. This is in line with the reduction in the number of cash withdrawals, also down by 15% over the same period (LINK data). Within this overall decline, the pattern has varied by different type of cash access points. FTU ATMs have seen the largest decline in numbers, falling by 19% (equivalent to just over 10,000 ATMs) while the number of PTU ATMs has increased by more than 6%, equivalent to 800 ATMs.

Overall, recent changes to the number of cash access points means that approximately 10% of the UK population currently have to travel longer distances to access cash than they did in 2018. The impact of these increases in distance is likely to be different for different consumers and, for example, the impact may be more negative for those with disabilities or health conditions.

Another aim of our research was to establish whether the relative affluence or deprivation of a locality was reflected in their access to cash. This is because those living in more deprived areas may have characteristics that mean they are more likely to rely on cash than those in more affluent areas, although it should be noted that they may not choose to access cash in their neighbourhood due to travel, shopping and work patterns. We matched each neighbourhood with its Indices of Multiple Deprivation score within each country and then allocated it to a decile - the first decile being the most deprived 10% of neighbourhoods, the 10th decile representing the 10% least deprived. We explored the distribution of changes for FTU and PTU ATMs and present findings according to deprivation deciles.

Net change in ATM numbers by deprivation decile and by rural-urban status, between March 2018 and March 2020

Whilst this is mitigated by the presence of free cash access points, a larger distance to these free cash access points may lead consumers to use PTU ATMs, either because of convenience or difficulty in travelling longer distances. As we do not have access to local withdrawal data for either FTU or PTU ATMs, we are currently not able to assess the impact of this; however, national figures from LINK do highlight that the average number of withdrawals per PTU ATM has been increasing in recent years (as shown below) – though on average PTU ATM usage remains considerably lower than at FTU ATMs.

Average annual withdrawal volumes for FTU and PTU ATMs, 2012 to 2019 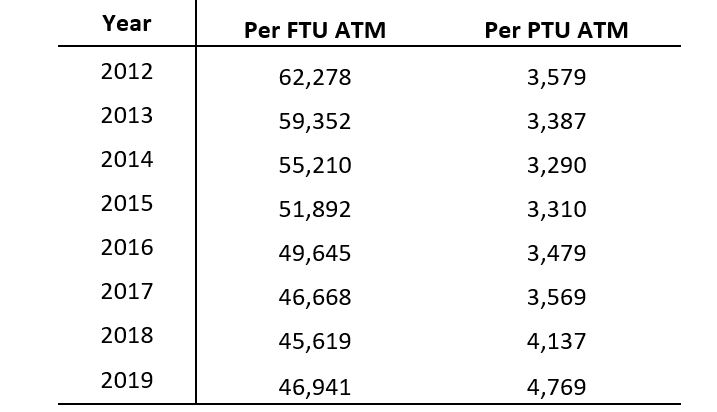 Can cashback fill the gaps?

Our analysis also found that generally accessible cashback vendors, such as supermarkets, account for the largest share of locations (49%), but potentially less accessible venues such as pubs (14%), restaurants (10%) and gambling establishments (12%) account for over a third of locations.

However, there are some drawbacks to the current system of cashback, leaving aside the issue that it presently requires the customer to make a purchase in order to withdraw cash. On average, the amount of cash withdrawn through cashback is £20, significantly lower than the average for ATMs of £60.  Furthermore, 25% of merchants provide less than 100 cashback transactions per year and could potentially not provide access to cash on a larger scale.

Percentage of cashback merchants that fall into different ‘merchant categories’ 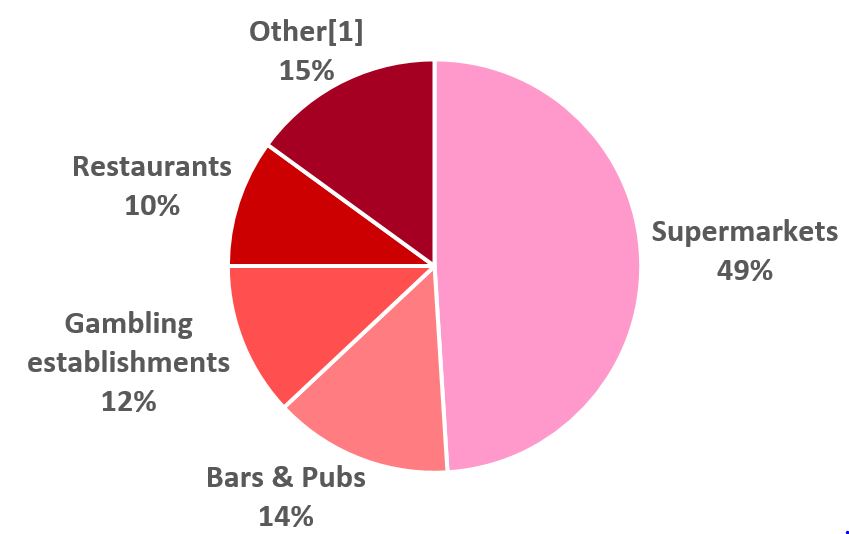 1. Includes fuel stations, department stores and many other types of merchants.

Overall, our findings provide a mixed picture. Most consumers have nearby access to cash, although differences exist between rural and urban populations. Recent changes to the number of cash access points means that approximately 10% of the UK population currently have to travel longer distances to access cash than they did in 2018.

Our analysis has also shown a rising number of PTU ATMs in deprived communities as a proportion of all ATMs. Additional work is needed to establish whether people living in these more deprived neighbourhoods are becoming more reliant on PTU ATMs to access their cash.

Whilst this analysis has progressed our understanding of access to cash nationally, it cannot speak to the localised experience of particular communities. This, however, could be done by analysing local patterns in more detail using localised ATM withdrawal data.

The need for access to cash should be examined in more detail, to consider whether the current location of cash access points meets these needs, and to consider the ‘quality’ or appropriateness of access to cash. Is cashback a potential substitute for an ATM or bank branch? Does the reliance on the Post Office in rural areas meets the needs of consumers in these areas?

Commuter and consumption patterns, in light of future changes may provide further insights into how different populations access cash.

Our work builds and extends previous analysis on access to cash, but the relationship between consumers and cash is highly complex and there is a huge potential for further study. 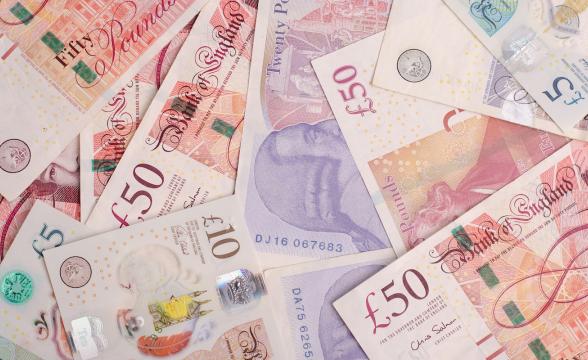 The cash system used to receive very little attention in non-specialist circles. Now, with the reduction in use of cash, discussions around access to cash (A2C) and the possibility of a cashless... 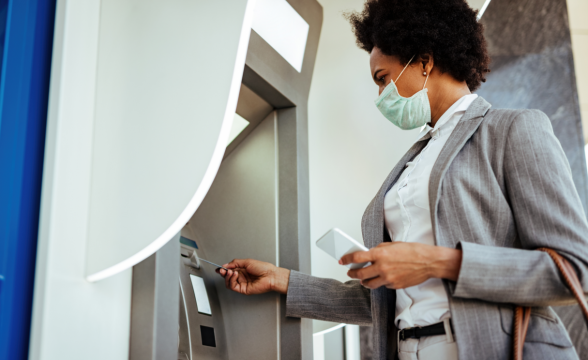 Cash and Covid: identifying gaps in provision during Covid-1

Access to cash is a pressing issue highlighted in the FCA’s recent Sector Views report, and the Covid lockdown...