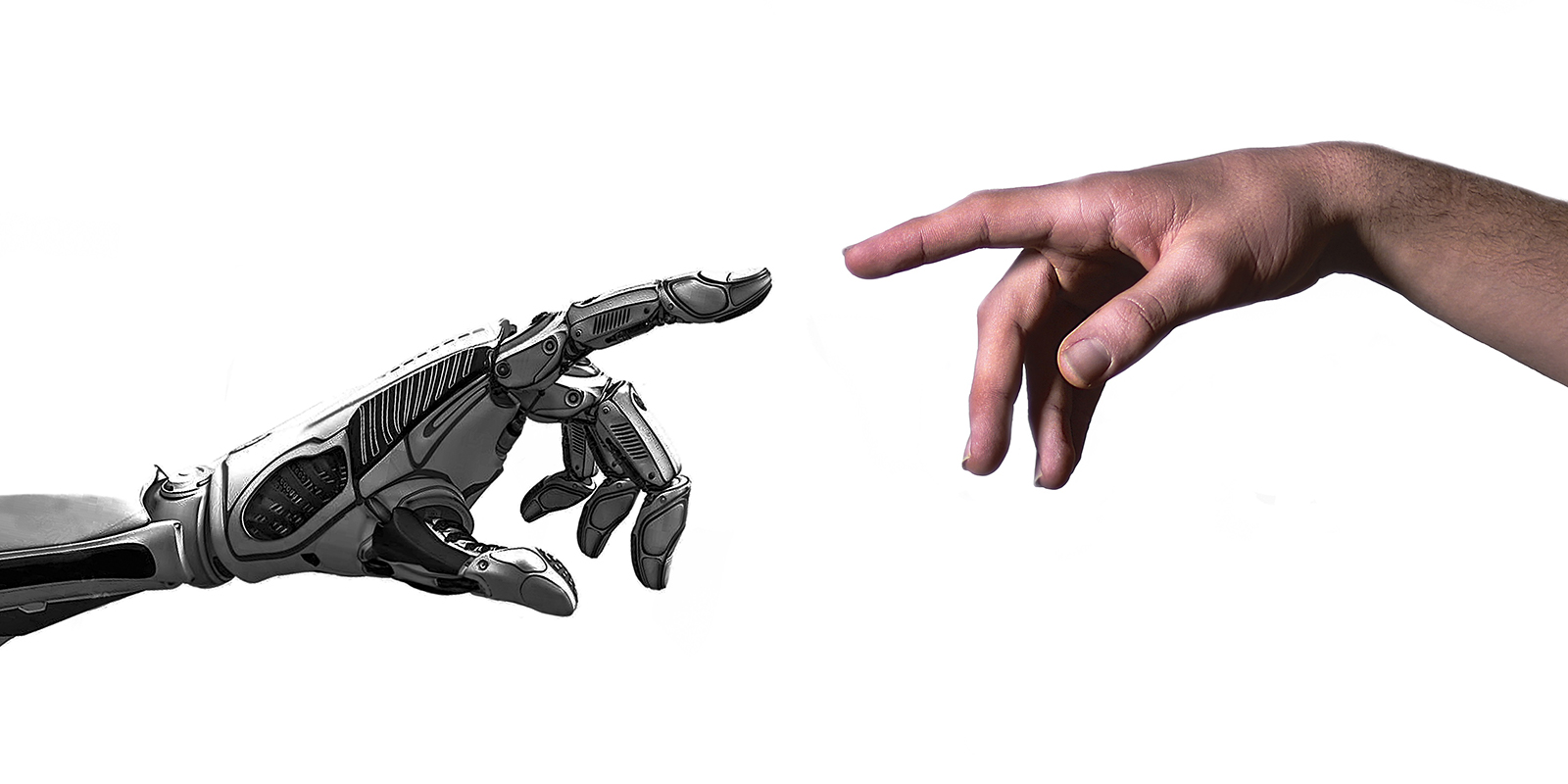 Robo Advice – will consumers get with the programme?

Robo Advice – will consumers get with the programme?

With increasing financial choice has come the need for improved financial decision-making. However, professional advisers come at a cost. A recent review of the market for investment advice by HM Treasury and the FCA found an ‘advice gap’ in investment markets, with a significant proportion of consumers unable to access the guidance they might need.

Many see robo advice - automated platforms using algorithms to guide consumers – as a way to provide widespread and affordable solutions.

But research carried out by FCA economists has found substantial resistance among consumers to robo advice, and identified a hard-core of robo-refusers, who have something of a disposition to reject advice from an algorithm.

Worryingly, these robo-refusers may well be the very people who might need it most.

We recruited a nationally representative sample of 1,800 individuals to explore attitudes towards robo advice and potential underlying drivers. Participants were presented with hypothetical situations in which someone has been offered investment advice from a robo adviser. They were then asked whether they would recommend accepting or rejecting the advice.

The trials were conducted online and along the way individuals were assessed for their own financial literacy and a range of other personal factors, including loss aversion, key personality traits and standardised measures of trust in corporations, banks and other people.

We also varied the quality of the hypothetical advice across treatments – with some advice matching well to the stated aims and risk appetite of the consumers and advice in other cases matching less so.

In an overall majority of decisions - 57% - the robo advice offered was rejected.

It was notable that varying factors across our treatments produced little variation in overall acceptance or rejection rates, including quality of advice.

What made the difference between acceptance or rejection of robo advice, at least for these hypothetical investment scenarios, appeared to be the consumers themselves.

As might be expected younger consumers were more likely to accept robo advice, with a marked drop off in acceptance among the over 55s. 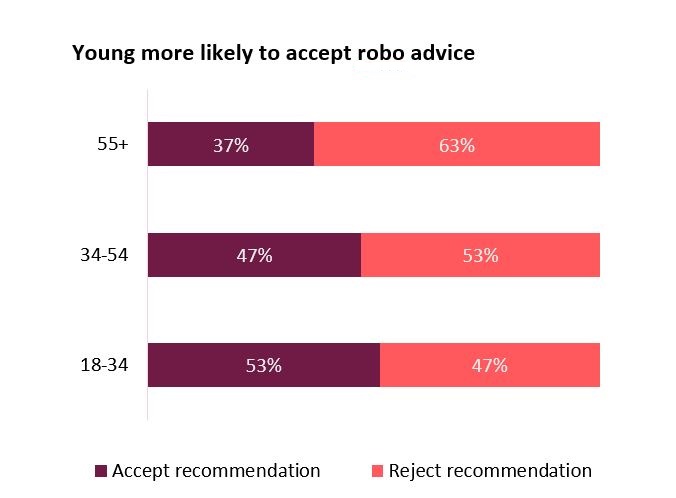 It would however be wrong to over-generalise and to assume that all younger people are tech-friendly when it comes to financial advice or that they are more likely to seek advice from experts of any kind – as we shall see later.

Another factor that came through was gender, with women more likely to accept robo advice than men. 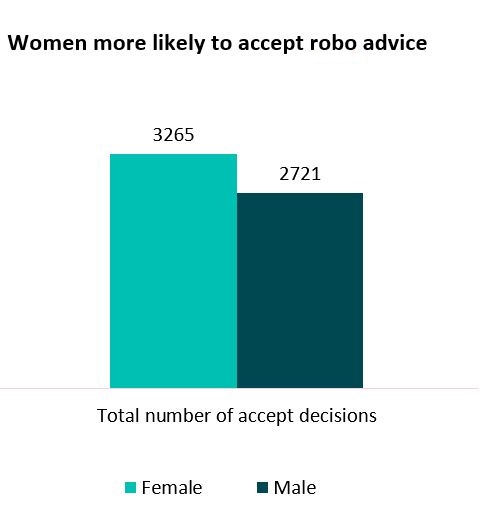 One of the strongest correlations, however, centred on trust. The research assessed each participant’s general level of trust in large corporations (as captured by scores on standardised trust measures in previous academic research).

While at first glance the issue of rejection might be assumed to be a matter of technology aversion – or more specifically “algorithm aversion”  – it may well be that what matters most for the people in our sample is trust in corporations, regardless of whether they come in person or through a digital platform.

A further interesting finding was that attitudes among some consumers were quite polarised, at least in these initial trials across the scenarios and settings we explored. A hard-core of refusers – some 30% - appeared to have a disposition to reject robo advice consistently across our treatments.

Similarly, there were 10% of people who tended to accept robo advice in almost all situations, regardless of the hypothesised quality of advice or framing of the scenario.

The dark red bars in the chart below shows the distribution of consumer `types’ we observed in this sense, with bars on the extreme left and extreme right showing respectively those disposed to reject or accept robo advice. This is set against the pink shaded mass – the distribution we’d expect to see had people made choices to accept or reject robo advice across our treatments entirely by chance. 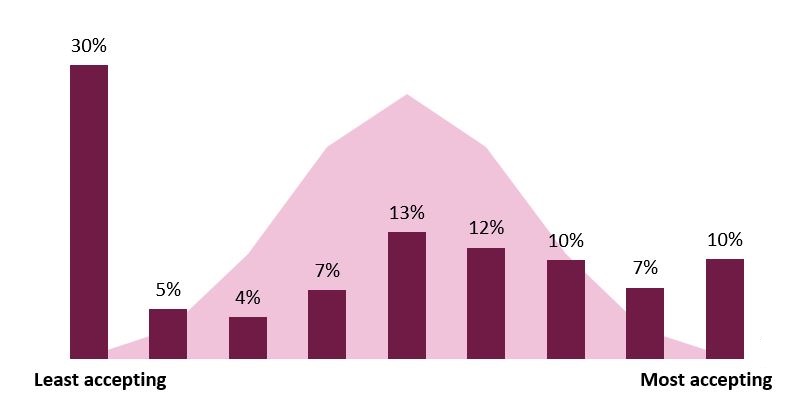 Perhaps unsurprisingly robo-refusers in our experiments showed similar demographic characteristics to rejecters in general – they tended to be older, male and less financially literate.

Older consumers may be facing some of the most important financial choices of their life – how to use their pension freedoms, whether to opt out of certain pension schemes, consolidate pension pots and perhaps plan for possible social care. They also have the smallest opportunity for correcting any poor judgements.

Who you gonna call?

If a sizeable proportion of people is likely to reject robo advice, the next obvious question is: what are they likely to do instead?

The research addressed this by asking those who had rejected robo advice, what they would recommend doing as an alternative. They were given 3 options: consult a human financial adviser; seek advice from friends or family; or trust their own judgement.

The most common option indicated, chosen in 72% of cases, was to recommend advice from a human financial adviser. Women were more likely to indicate this preference.

The next most popular option among the robo rejecters was to ask advice from friends or family, an option chosen by 21%. These individuals were more likely to be young, of lower socio-economic status, less trusting of banks and have lower financial literacy.

Here we see the importance of not generalising about the younger population. While overall they may be more likely to accept robo advice, there are plenty young people who are not. These young robo-rejecters are also less likely to seek professional advice of any kind.

Combined with the other factors we found to be associated with relying on personal networks - lower socio-economic status, lower financial literacy, lower trust in corporations - we may be able to see here the outline of a divide in the younger generation between those more advantaged and more comfortable with technology and intermediaries, and those less financially capable, but also less comfortable with tech and placing trust in financial intermediaries.

This raises the concern that those who may be most in need of advice – lower socio-economic status and low financial literacy - may be least likely to embrace support through robo-advice or any other form of professional guidance.

Those who reject robo advice in favour of the third option - trust own judgement—represented the smallest group just 7% of robo-rejecters.

Again though, the profile of this group was somewhat distinct – more likely to be male and middle-aged, have trust in banks and have higher financial literacy.

It is hard to draw any clear conclusion from this – aside from making the obvious joke that middle-aged men don’t like asking for directions. But it is worth remembering that higher financial literacy may not be the same as sufficient financial literacy, and that a little knowledge can be a dangerous thing if it leads to over-confidence.

The headline findings of this research suggest that robo advice has a way to go before it is embraced by the majority of consumers.

It also identifies some of the obstacles to its widespread acceptance. Some of these are to be expected, such as the generational differences in technology adoption. Others point to significant hurdles that have little or nothing to do with age or even technology potentially, such as basic trust in financial corporations, socio-economic status and the complex question of consumers’ trust in their own judgement or that of their friends and relatives.

There is clearly huge potential for robo advice to become a major part of the financial landscape, offering great advantages in cost and convenience for many consumers, liberating us from much of the hard work of tough decisions and potentially saving us from cognitive biases and limitations that may lead us astray in complex scenarios.

What is less clear is whether it can solve the advice gap in the foreseeable future and whether ultimately those who may need decision support most will have faith in the algorithms of the future. 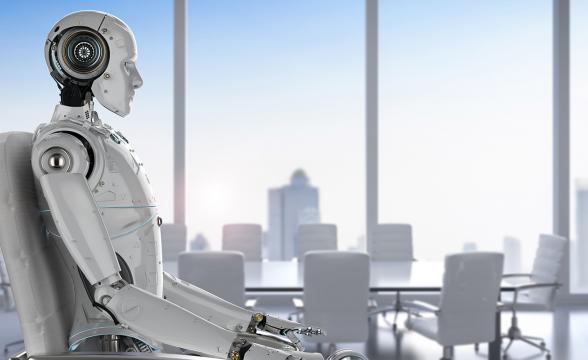 Artificial Intelligence in the boardroom

The advent of AI is not just a matter for the technicians, those at the very top of firms must take responsibility for the big issues. 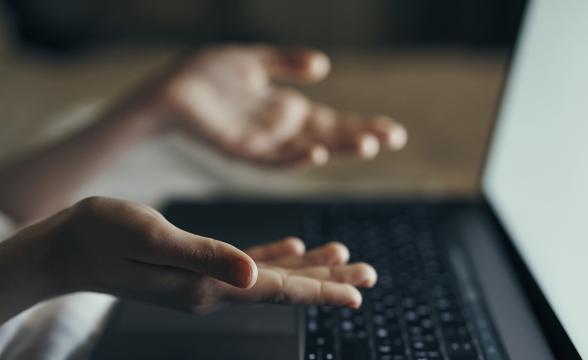 Explaining why the computer says ‘no’

The financial services industry is on the brink of revolution in artificial intelligence. But can the rise of AI decision-making be compatible with the need to explain decisions to consumers?