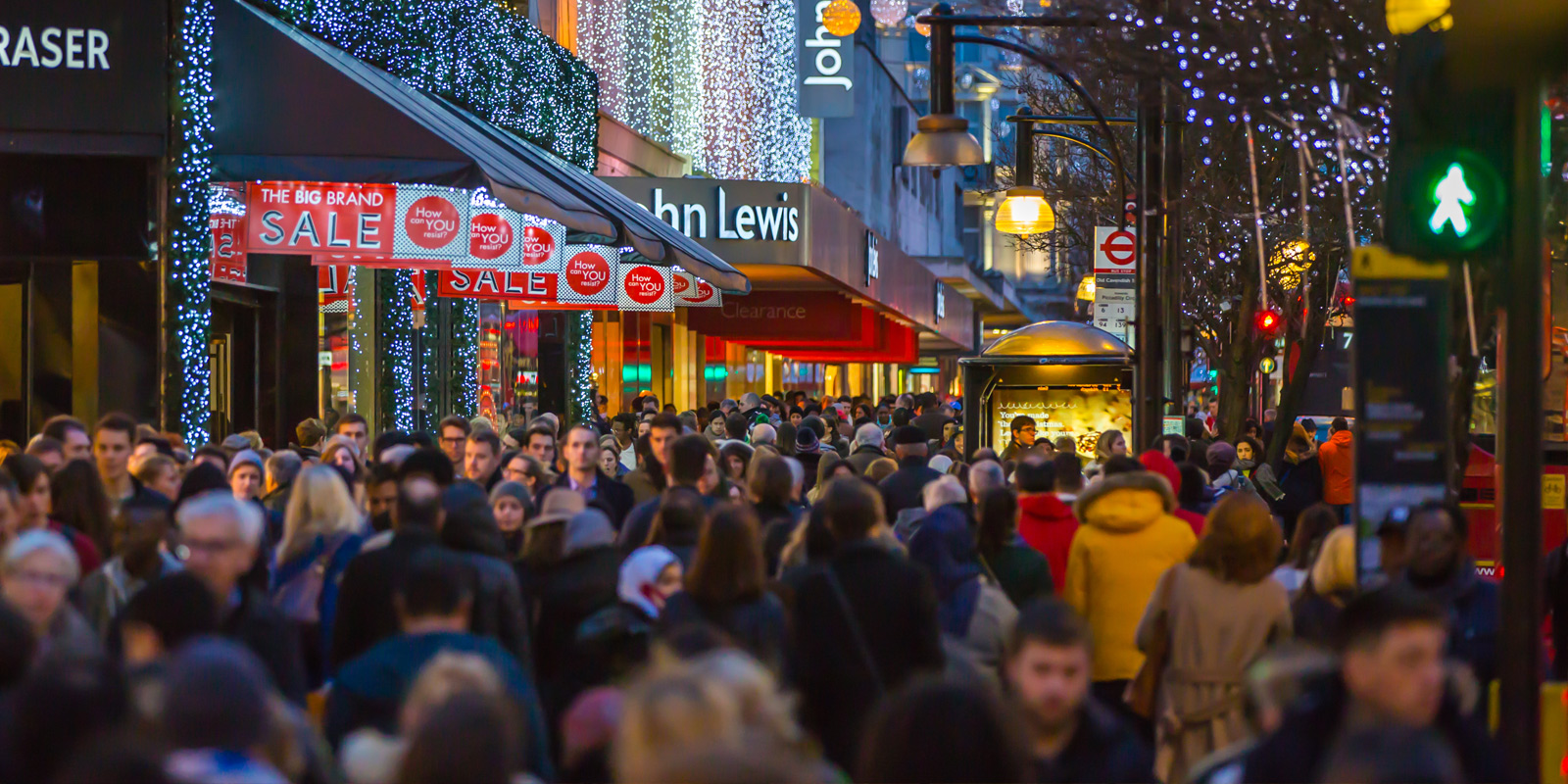 Let’s face it, we all like a bargain. Black Friday is the most frenzied shopping day of the year and it brings out the most extreme bargain-hunting behaviours. Shoppers are known to camp out in shopping centres the night before to be the first to get their hands on the deals.

For retailers, this is a bonanza. But not everyone is impressed. Reports of unseemly disorder and fights in shops are common. Some economists have even blamed it for the sharp rise in unsecured consumer debt seen in the UK at the end of 2016.

When you consider Black Friday only arrived in the UK around five years ago, this is pretty remarkable. What is it about Black Friday that has turned it so quickly into the biggest shopping day in the UK? And to what extent is it driving the UK’s increasing consumer debt?

To answer the first question, Black Friday is of course designed to lead you to spend. For starters, it is hard to ignore. A wave of carefully crafted and targeted marketing messages draws our attention in the run up to the big day. These are excellent hooks to get us in the door.

Marketers have known for a long time that people value goods more if they are scarce.  Although Black Friday discounts now sometimes extend over a number of days, these time-limited sales, combined with often limited numbers of goods at discount prices, are a sure way to draw in customers. These are known as ‘door buster’ deals. Deals that are so good, you’ll break down the shop door to get them.

The trick is that once you’re in the shop, you are far more likely to buy other non-discounted items too. You go in for that heavily discounted laptop, but you just can’t resist the fancy laptop case or the nice headphones you’ve had your eye on for a while. Any savings you make on the laptop can quickly disappear.

Time-limited sales, combined with often limited numbers of goods at discount prices, are a sure way to draw in customers.

There are many other factors encouraging us to buy on Black Friday, for example, we may succumb to the ‘sunk cost fallacy’, whereby the more effort we invest in something, the less likely we are to abandon it. So after spending all that time queueing, we’re more likely to buy something.

Richard Thaler, the recent Nobel Prize winner, has proposed a theory of ‘transaction utility’. It suggests that we are more likely to buy something if we believe we are getting a good deal, even if we wouldn’t have otherwise bought it. A bargain can feel good, but it can come at a cost.

But do these effects really translate into higher levels of spending, borrowing and debt?

To support its policy making in areas like consumer debt, the FCA collects and analyses huge samples of anonymised bank account and consumer credit data. This is vital for understanding consumer behavior; whether in response to a change in the market or to measure underlying trends. It also, as it happens, reveals some interesting trends in our spending habits on Black Friday.

As you may have guessed, these new FCA data (based on over one billion customer transactions using data on debit card spending and ATM cash withdrawals from four large UK banks) show the UK spends more during Black Friday weekend than any other weekend of the year. This includes the Monday after Black Friday, as online sales are often extended to this day. In 2016, we spent over a whopping £900 million more on our debit cards compared to an average weekend. That amounted to a spend of £5.35 billion over the weekend. These pound amounts come from a large increase in transactions compared to an average weekend, from 116 million to 137 million.

Of course not everyone partakes in Black Friday; big numbers can mask large variations in spending. Digging deeper, we drew out a hard core of consumers (15%) who spent at least £100 more on the Black Friday compared to their average weekend spend. This group averaged £399 of spending over the weekend, more than triple their weekend spending average for 2016 of £117.

Breaking down consumers by their age and overdraft limits (a proxy for creditworthiness), we look at which groups spend more on Black Friday weekend compared to an average weekend. We see that the consumers who spend more tend to be younger than 65, and have higher overdraft limits. 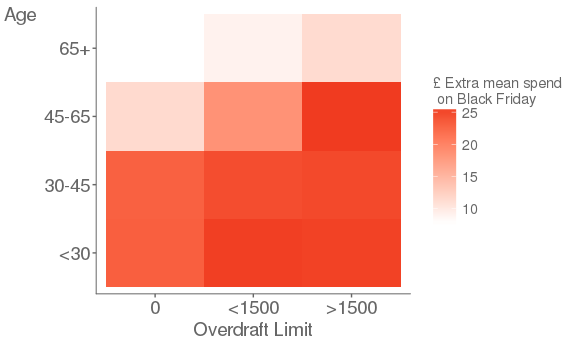 Figure shows the difference between spending on Black Friday weekend 2016 and average weekend spend in 2016 for each age and overdraft group.

Give me some credit

Given the increases in spending, we were interested to know whether this translated into greater overdraft use, a type of unsecured consumer debt.

Looking more widely, we checked the use of catalogue credit, a relatively expensive type of unsecured consumer credit. We found that the most popular day for taking out catalogue credit was indeed Black Friday in both 2015 and 2016. However, November saw higher numbers than all other months anyway, so it is not clear it is Black Friday that is driving borrowing up or impacting future repayment patterns and higher balances. Equally, we saw the biggest purchases from credit cards during November. Even if we ignored Black Friday our data here suggest that the rise in borrowing over November is a seasonal effect – more likely driven by the Christmas shopping period than Black Friday.

Do consumers appear to care about what they are spending on Black Friday? Mobile banking usage is an indicator that people are keeping an eye on their finances. There is a clear long-term upwards trend in the use of this technology. But we found a notable spike in usage on Black Friday, suggesting that people are paying more attention to what they are spending on this day. In fact, around a fifth of the UK logged on during Black Friday 2016. 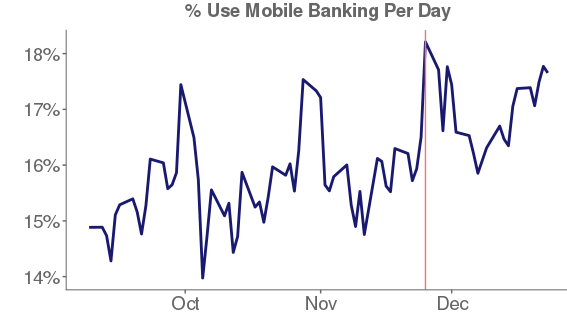 Figure shows use of mobile banking from September to December 2016. Black Friday is indicated by the red line.

The trends we are looking at here indicate a fairly complex picture of consumer spending around Black Friday. Whilst spending is higher, a lot of it is concentrated in just a small proportion of, seemingly, very dedicated bargain hunters.

Another interesting point is that our Black Friday splurge doesn’t appear to have any knock-on impact on overdraft use. And our mobile banking data indicate that people are keeping an eye on their finances. While other consumer credit spending does tend to rise in November, it is likely driven by factors outside Black Friday, and may be attributed to wider Christmas spending.

What does this tell us? One possible conclusion is that a lot of UK shoppers are less bewitched by Black Friday than previously imagined. Another is that those who do spend more seem to plan carefully and save for the day, delaying purchases and waiting (and sometimes camping out overnight) for that gadget they’ve always wanted. 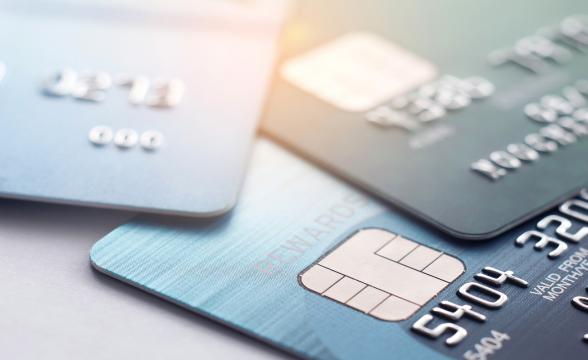