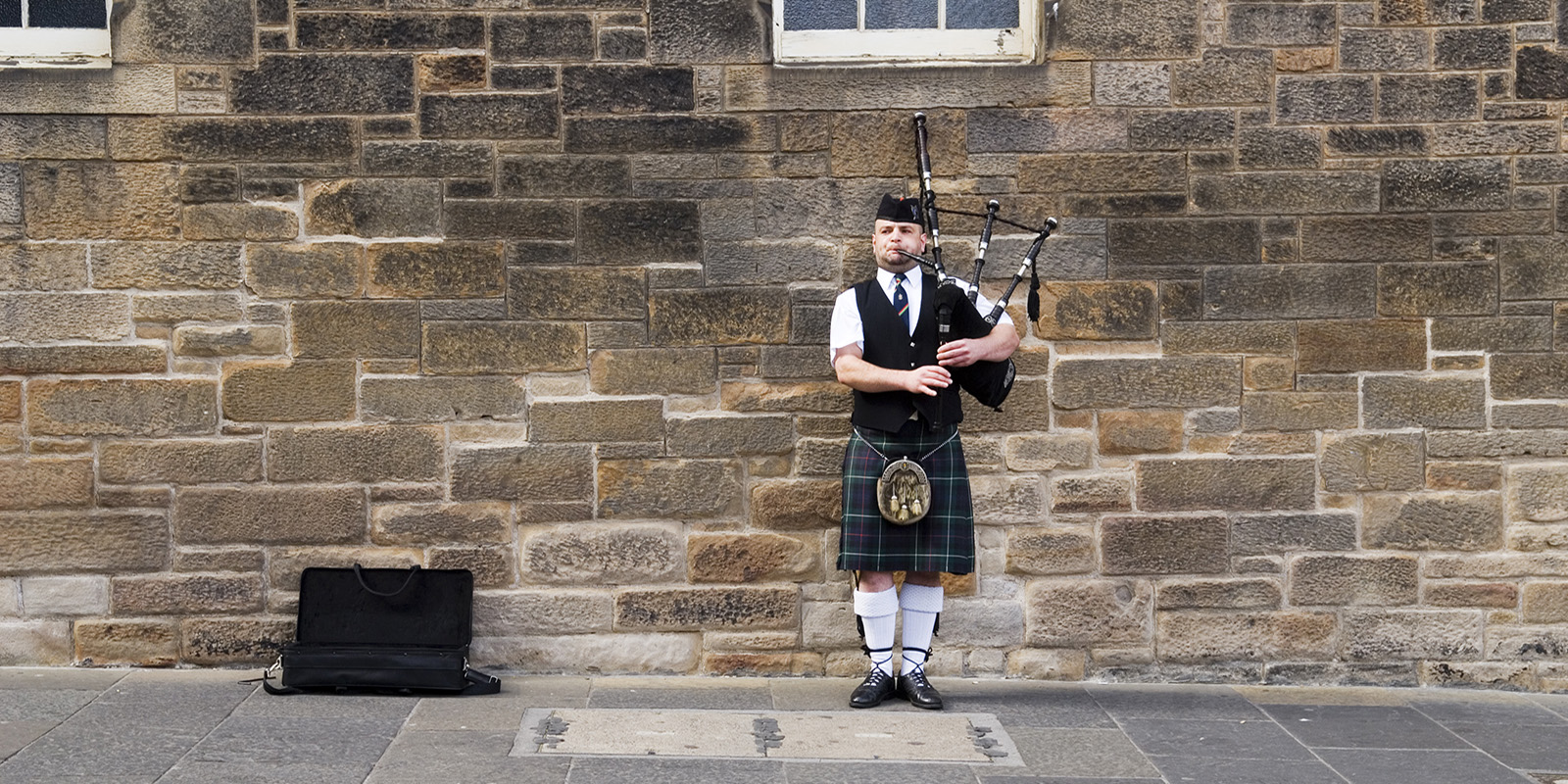 Paying the piper: In a world of passive investing, who would call the market’s tune

Paying the piper: In a world of passive investing, who would call the market’s tune

Investors seeking to gain exposure to equity markets are increasingly doing so via passive funds, and investors in UK equities are no exception. The proportion of mutual fund investments in the FTSE 350 managed passively has steadily increased from 12% in 2011 to 24% in 2018. One of the principal drivers of the shift to passive investing is their low cost.

Research into the typical costs of investing - measured by the weighted average Total Expense Ratio - clearly shows lower costs to passive investors. But it also shows that the competition from passive investment may have driven active funds to cut their costs to remain competitive. A clear example of competition bringing real benefits to consumers.

The trend, however, raises questions for the future. How far will the rise of passive investment go and could it ever be too far?

The rise of passive investment is widely recognized, but it is worth briefly quantifying this trend.

We extracted annual snapshots for all funds that have a position in any FTSE 350 firm for the years 2009 to 2018. The sample size varied over the time period, but in 2018 it contained around 12,000 mutual funds that collectively held 186,000 positions in FTSE 350 firms.

The study showed the proportion of the FTSE 350 held by mutual funds has risen markedly, from about a quarter of the index’s market cap in 2011 to about a third in 2018. Furthermore, the proportion of those fund holdings that are held passively – typically index trackers – has also risen.

In the immediate aftermath of the financial crisis, the proportion of mutual fund assets managed passively remained in the neighborhood of 12% of total mutual fund assets. Between 2011 and 2018 this figure doubled to 24%. 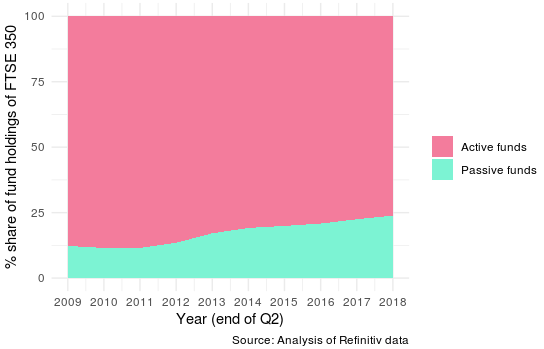 It is widely assumed that passive investment is cheaper and our research bears this out. The cost to investors of being in passive funds - measured by the weighted average Total Expense Ratio (TER) – is nearly 1 percentage point lower than the weighted average TER on active funds. Given that the long run real rate of return on UK equities has been about 5%, this cost advantage is significant.

What has been less well recognised is the effect of this price competition on the wider fund market. Over the period covered by our research, the average TER fell, not only for passive funds, but also for active funds.

Indeed, it appears that while active funds have been able to maintain a price premium over passive funds, that premium has been roughly constant. As passive fund TERs have declined, active fund costs have also reduced in order to remain competitive. Both passive and active investors have benefitted. 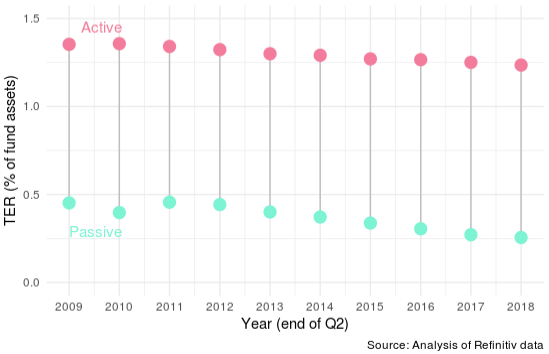 While the explicit management charges captured in a TER are a major component of the cost of investing through funds, investors also incur implicit transaction costs, such as bid-ask spreads. These costs arise as a result of funds’ trading activity.

We triangulate the magnitude of these implicit costs by scaling estimates from the academic literature (Edelen et. al. (2013). Shedding Light on ‘Invisible’ Costs. Financial Analysts Journal, 69(1))by the trading activity of the funds in our sample. We also consider ex ante transaction cost estimates that some funds report under MiFID II.

Taking both explicit and implicit costs into account, the true gap between active
and passive expenses is higher than the gap in TERs alone would suggest.

Overall, weighted average charges across active and passive funds together have declined by 20% over the last decade.

While some of the costs faced by mutual fund investors end up as profits to fund managers, the costs are also used to fund work that adds value. And crucially some of that value accrues not only to particular funds, but to the market as a whole.

Passive funds can operate with low charges because they (generally) take market prices and firm governance as given and so simply choose a portfolio in accordance with the index they are tracking. Active funds are more likely to engage in the research, trading, and in-depth monitoring of the firms in which they invest that brings about efficient and effective markets (that is, markets with prices that reflect fundamental values and with good corporate governance).

Research, trading, and in-depth monitoring require real resources and so have to be paid for. Yet, the efficient and effective markets that active funds play a crucial role in bringing about, benefit all funds.

As the proportion of assets invested passively increases, it is possible that market efficiency and effectiveness may decline and mispricing of assets become more common.

In theory, as the proportion of assets invested passively increases, it is possible that in the future market efficiency and effectiveness may decline and mispricing of assets become more common. Effective corporate governance may also be eroded, as fewer resources are allocated to active stewardship. Such a decline in market efficiency naturally imposes costs on investors collectively.

The FCA published a research note earlier this year that surveyed the academic literature on this point. And, indeed, the evidence suggests that an increase in the proportion of assets invested passively can adversely affect both market efficiency and effectiveness. For example, researchers have found that an increase in the proportion of assets managed passively leads to more price movements based on superficial effects rather than deep fundamentals of valuation – in the terminology the prices are ‘noisier’. The same research note recounted how firms with a higher proportion of their shares held by passive funds are more likely to engage in value destroying takeovers.

The rise of passive investment has been a boon to investors and has undoubtedly driven competition. But it is wise to look ahead and consider where this trend may lead.

Fortunately, these issues are now an area of active academic research and regulatory debate.

The FCA sponsored a conference earlier this year with the London School of Economics and the Securities and Exchange Board of India (SEBI) to promote the exchange of ideas between academics, regulators, and market participants on these issues. The regulator is also leading an IOSCO working group that aims to explore the implications of the rise of passive investing for financial regulation.

Efficient markets will always need a minimum of active investment

Passive funds create enormous direct benefits for investors individually by providing a low-cost method to invest in a diversified equity portfolio. Their continuing rise is also creating competition bringing lower costs across the board. Yet for markets to play their role as effective venues for price formation and in corporate governance there must be a minimum level of active investors to drive these functions.

At some future point, a declining influence of active funds in the market, or a decline in funding available for active funds to carry out that work, could materially undermine market efficiency and corporate governance.

We are not there yet, but regulators (and economic researchers) will be keeping a watchful eye. 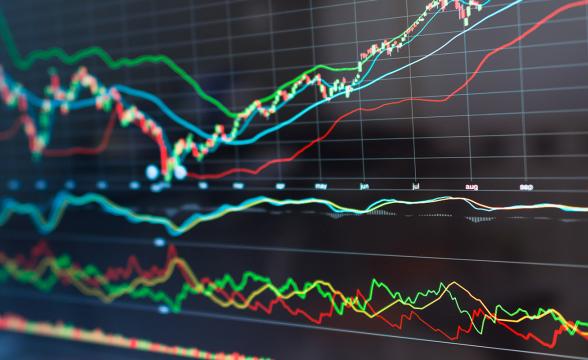 What happens to Exchange Traded Funds in times of stress?

The unprecedented growth in passive investment and of Exchange Traded Funds (ETFs) as a vehicle for both retail and institutional investors is one of the defining market trends of this century.... 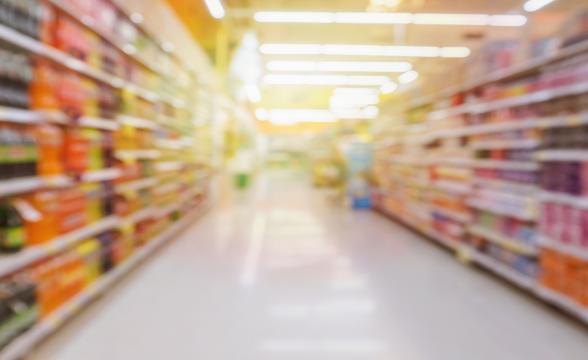 Platforms are increasingly popular with retail investors. But with some promoting their ‘own brands’ in the fund supermarket, are they offering real value?