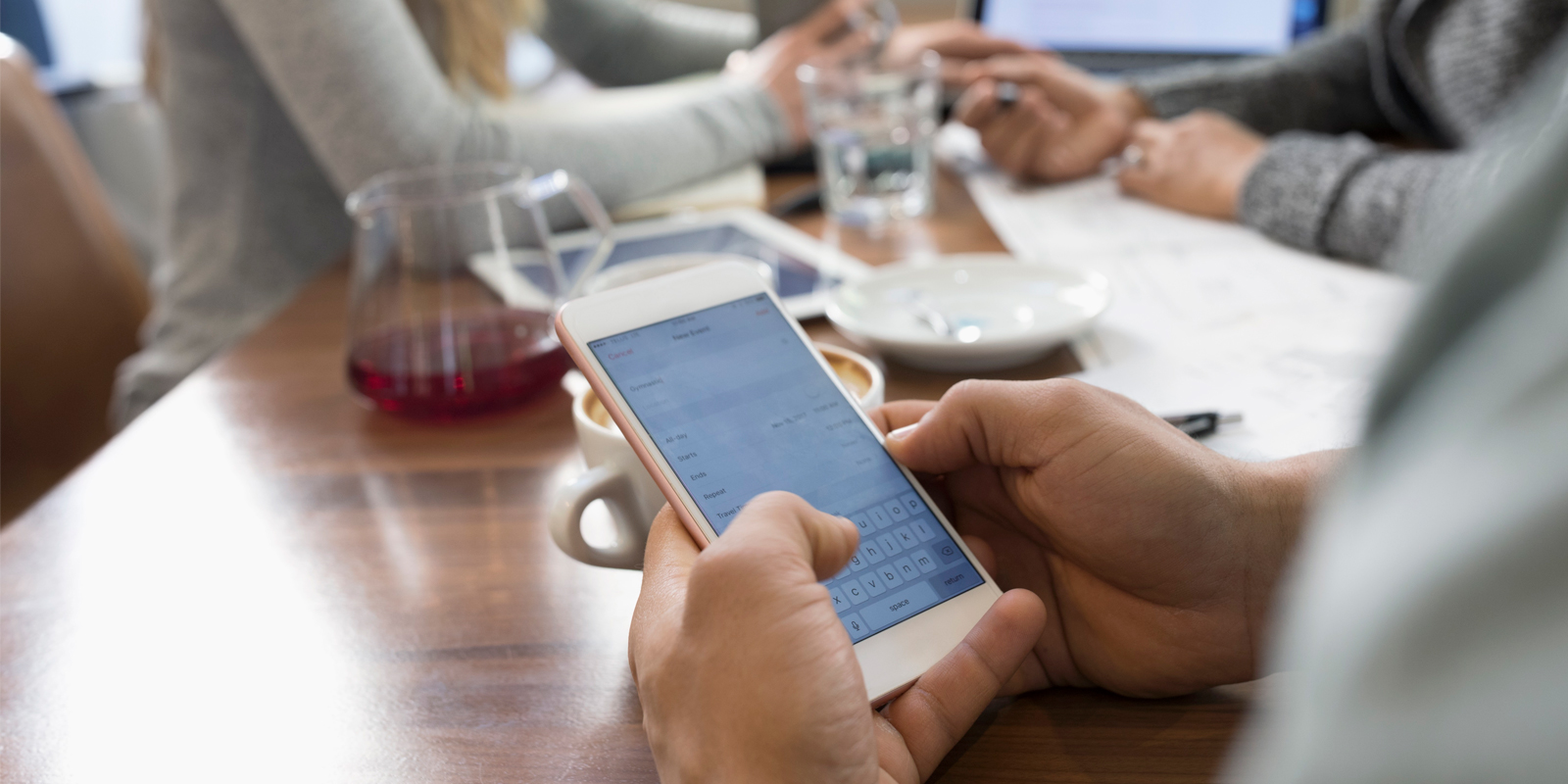 Paying attention or paying charges? It’s all in the timing

Paying attention or paying charges? It’s all in the timing

One of us has a very personal experience with not paying attention. Many years ago, as he embarked on a European road trip with friends in his first car (a 15-year old VW Golf mark II, since you asked), he noticed the fuel gauge had dropped pretty low. But since the fuel warning light had not flashed yet, he decided to shift his focus back to driving and chatting with his friends. Finally, the fuel light did flash… and ten seconds later the engine ran dry!

The cost of this inattention was a 6-mile walk to the nearest petrol station and much abuse from the passengers.

Wherever inattention is a problem, timely alerts (like properly functioning fuel warning lights) can make a big difference. We humans are easily distracted by what’s in front of us and so we have designed many types of alerts to jolt us into action at the right time.

One example most of us see every day, is the pop-up notifications warning of a low mobile phone battery.

FCA research found the same techniques can be used to stay on top of personal finances. Consumers can make large savings – up to 25% in some cases – from timely text messages informing them they were about to go overdrawn or had insufficient funds for a scheduled payment.

What makes these alerts so effective?

The core insights are quite intuitive. First of all, it makes a huge difference whether alerts are enabled by default or whether they need to be manually enabled by the consumer. In the latter case, only around 8% of consumers actually set up the alerts and many would-be beneficiaries lose out. The FCA therefore decided that, from December 18 2019 onwards, banks have to automatically send these text messages to all eligible customers, unless the customer has actively opted out.

We found that “just-in-time” alerts for overdrafts, sent when somebody goes into the red but before a charge was incurred, were more effective than early warning alerts sent at low-but-positive account balance levels.

Figure 1 shows how quickly people resolved their overdraft with the light turquoise bars showing those receiving ‘just-in-time’ alerts and the dark turquoise bars showing those receiving no alerts. In this and the following figures, we compare people who received alerts to those who did not – focussing in our analysis on customers who were in overdraft at 10am following overnight processing of transactions. With a just-in-time overdraft alert, consumers resolve 71% more overdraft episodes within the daylight hours of the first day. Without alerts, people are more likely to resolve the overdraft at night or in the following days. 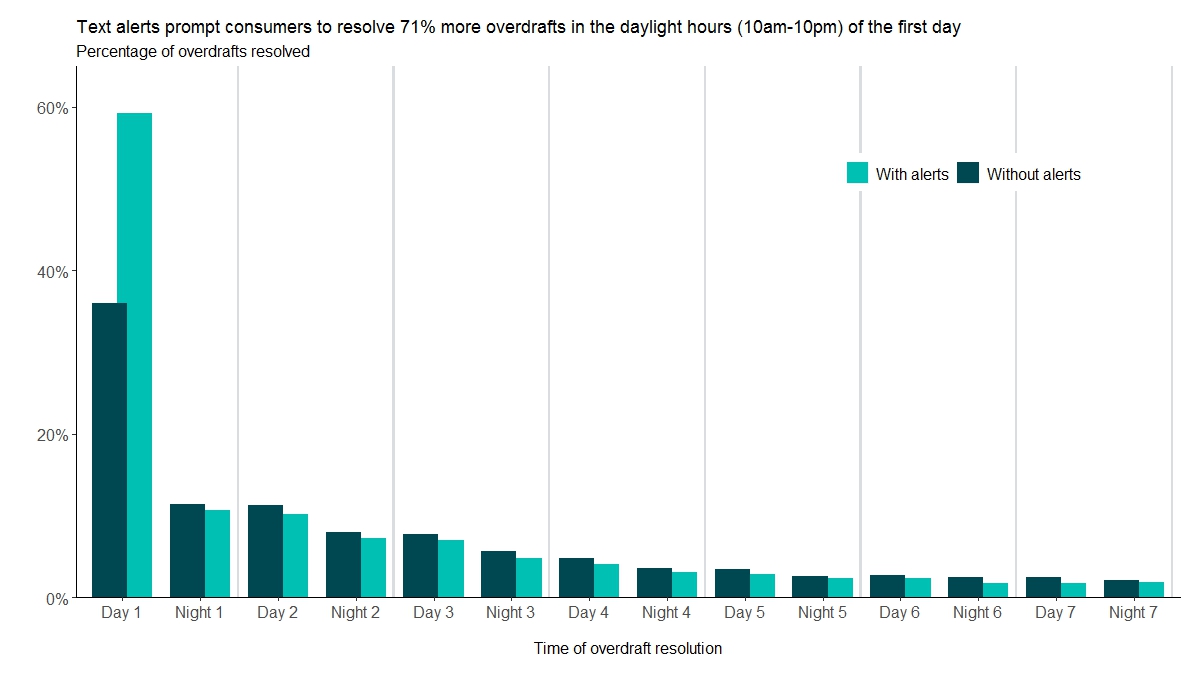 Digging deeper into the data, Figure 2 shows people’s hour-by-hour responses again with those receiving alerts in light turquoise, those without alerts in dark turquoise. It turns out that most people resolve the overdraft in the 5-hour window after receiving the alert in the morning – in fact, 2.4 times as much as people who don’t receive an alert.

Resolution rates in the two groups start looking similar after around 7pm, but this does not mean that alerts have lost their effectiveness at this point. Although the groups with and without alerts show similar levels of resolved overdraft episodes at, say, 8pm, the episodes of those in the former group would have probably lasted longer if it wasn’t for the alert. 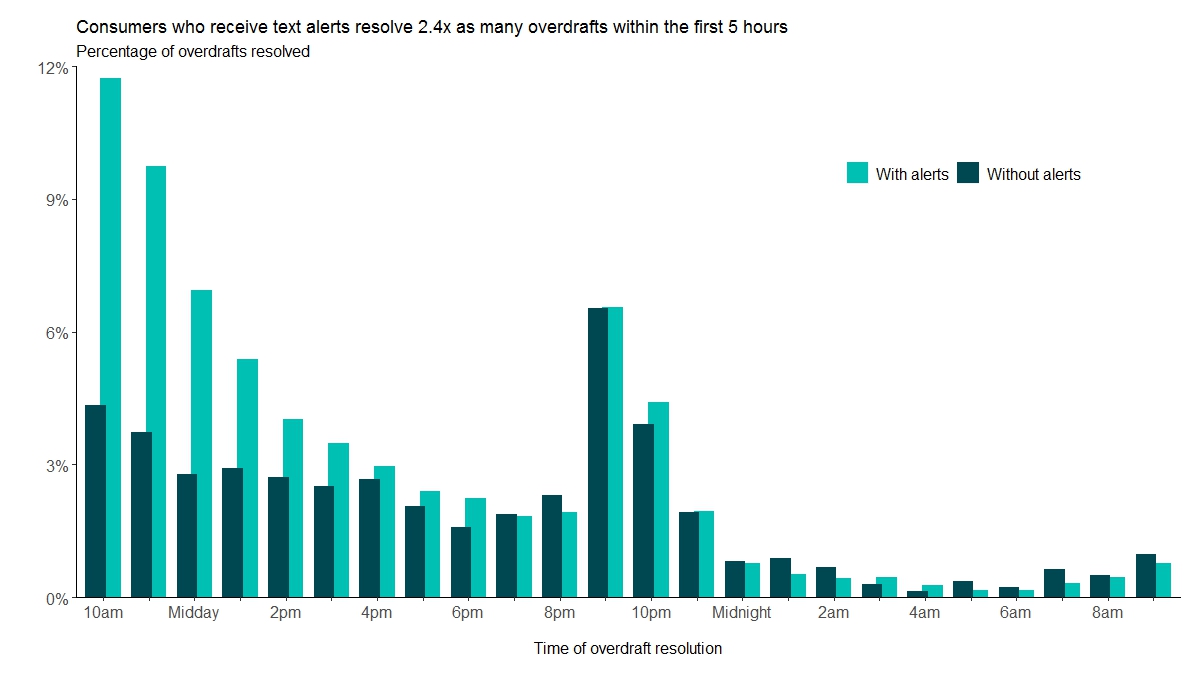 One of the things we would expect people to do following an alert is to log into digital banking – especially mobile banking. The data confirm that this happens.

Figure 3 shows logins to digital banking in the 24 hours following the start of the overdraft episode with and without alerts. Alerts are typically sent first thing in the morning and among those receiving alerts, there is a clear surge in activity in the morning and early afternoon. Unsurprisingly, 75% of these logins are mobile banking logins. 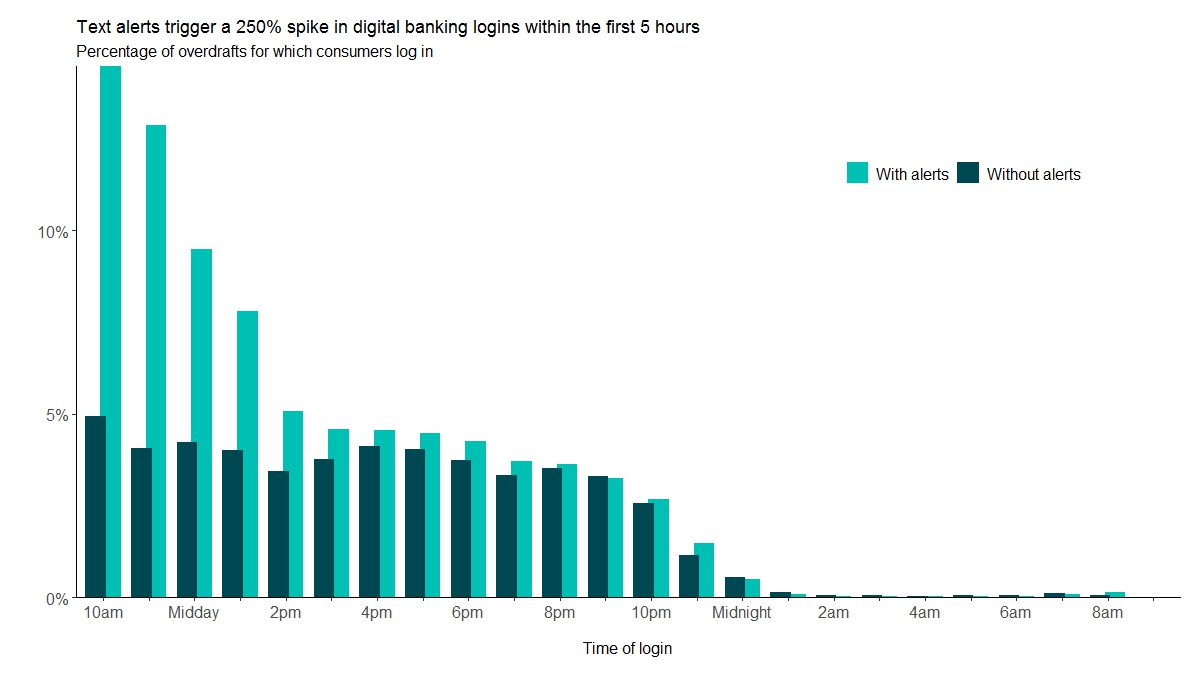 We also asked customers involved in the field experiment how they responded to the alerts and what they thought of them. Of the survey respondents that had taken action, most said they had transferred money from their savings – which partly explains the surge in digital banking logins we see in Figure 3. The second most common response from consumers was to cut back on spending as a strategy to get out of overdraft faster.

Our survey respondents told us that the alerts helped them stay on top of things. People said things like “because in a busy life we don't have always have time [to stay on top of things]” and “when I'm busy in the week at work (…) and I am getting near the end of my overdraft I can put in my available cash to avoid fees”.

Furthermore, most respondents were in favour of being automatically enrolled into alerts. We didn’t find evidence of ‘alert fatigue’, something we had been concerned with as people are getting more and more notifications these days. We believe the support for automatic enrolment is in large part due to people having an easy way to opt-out; an important design principle for ‘nudge’ policies such as these.

What’s next for text alerts?

Given the competition for attention that characterises our modern lives, we would not be surprised to see timely alerts appear in other policy contexts.

The UK government already runs an easy-to-use text message service called ‘Notify’ for civil servants, who can communicate anything from public emergencies to expired parking permits.

An interesting question is whether the delivery mechanism for alerts, mostly smartphones, will further develop to help people notice those notifications that should matter most to them.

Most phones already have ways of letting certain messages through in Do-Not-Disturb mode; perhaps the next iteration of this technology will have some default settings that save people the hassle of setting things up themselves? And financial institutions themselves may well have a role to play in designing the alerts that consumers find most helpful – perhaps allowing for a degree of personalisation in some cases.

As always, robust testing is key to make sure consumers do not pay the price for not paying attention.