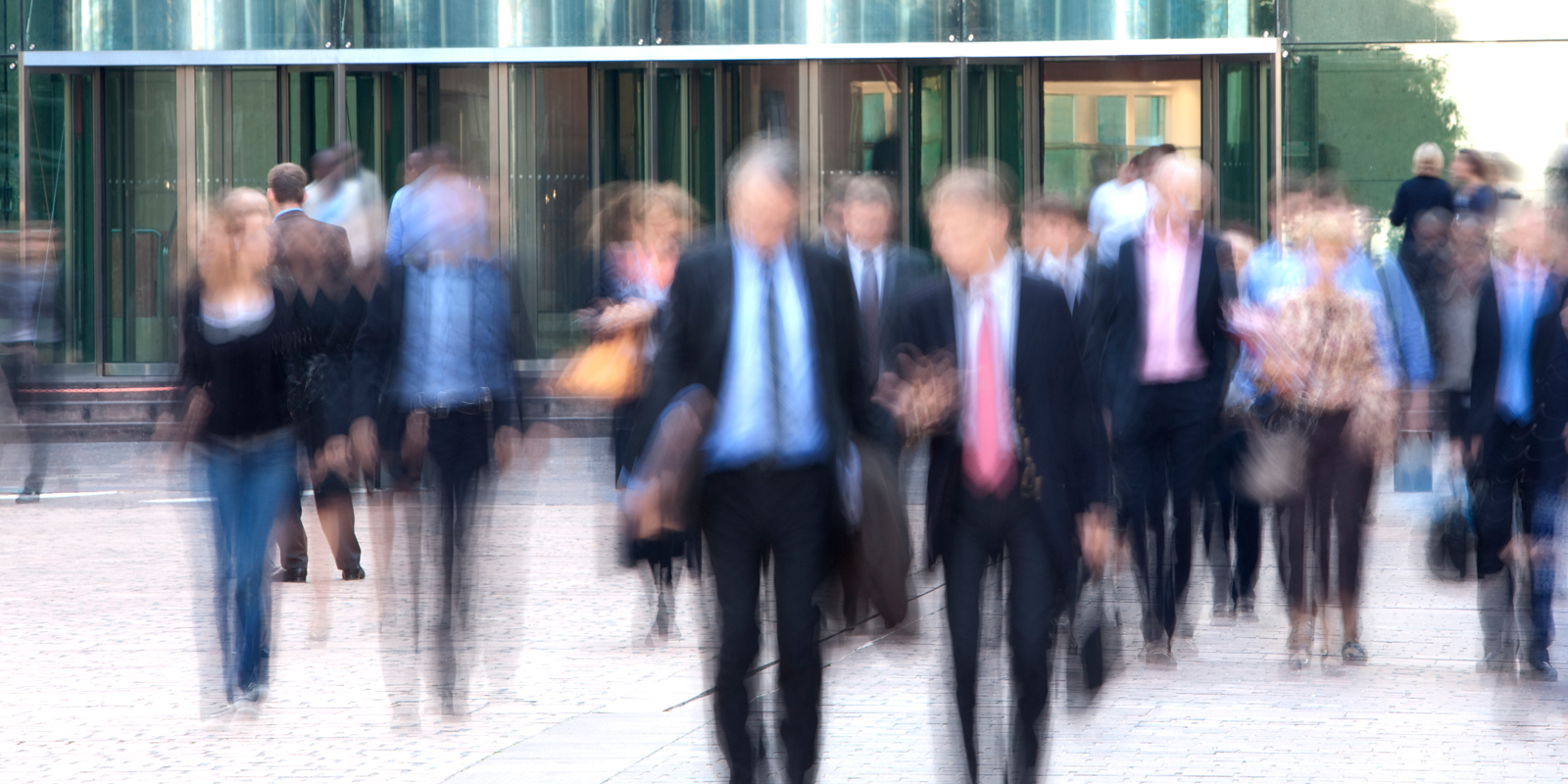 Financial Services – senior jobs are still mostly for the boys

Financial Services – senior jobs are still mostly for the boys

The last few years have seen a major focus on gender diversity in financial services, with concerns that male dominated firms are inherently more risk-taking and that firms need to represent the society of consumers they serve.

But despite the scrutiny and public commitments to evolve, financial services have seen little if any improvement in gender diversity.

That is not to say there has been no change at all. For example, the proportion of women in approved roles has risen at some systemically important banks, potentially reflecting the high level of regulatory focus on these institutions since the crisis. But even there the rise has come off a low base and only takes this group to just above a low overall industry average.

Meanwhile, other sectors in finance have lagged well behind and some remain the same `old boys clubs’ that they ever were.

Financial Conduct Authority (FCA) data provide a unique lens on gender diversity among more accountable individuals in UK financial services, thanks to the historic Approved Persons register and its newer incarnation in the Senior Managers and Certification Regime (SM&CR).

We studied the approximately 400,000 individuals that appear in these FCA registers between 2005 and 2019. As of June 2019, individuals in the register represent about 5% of the financial sector workforce, with a skew towards more accountable positions. These roles are either senior management or client-facing and as such are crucial to the culture and operation of UK financial services.

In most cases, we estimate gender from title (Miss, Ms, Mr, etc). In cases where titles are ambiguous (for example Dr) we used first names as a proxy to determine gender.

While not guaranteed to be a perfectly accurate predictor of gender in every individual case, this approach gives us a statistically reliable basis for estimating gender diversity at the overall level and for meaningful subgroups, given our large-scale data set.

Our headline analysis reveals little has changed on gender diversity at more accountable grades in the past 15 years.

The notional data show a marked dip in 2016 before rising once again (see blue line in the graph below). This coincides with the introduction of the SM&CR system which in aggregate saw a reduction in the number of client-facing roles approved by the FCA – a change also reflected in the drop in absolute numbers of individuals in the database shown by the bar chart.

The SM&CR introduction affected types of firms and roles differently and created a mix shift in our database: the group of people no longer covered from 2016 were slightly more likely to be female. We estimate that the change in estimated gender diversity that year represented a non-fundamental, one-off effect. 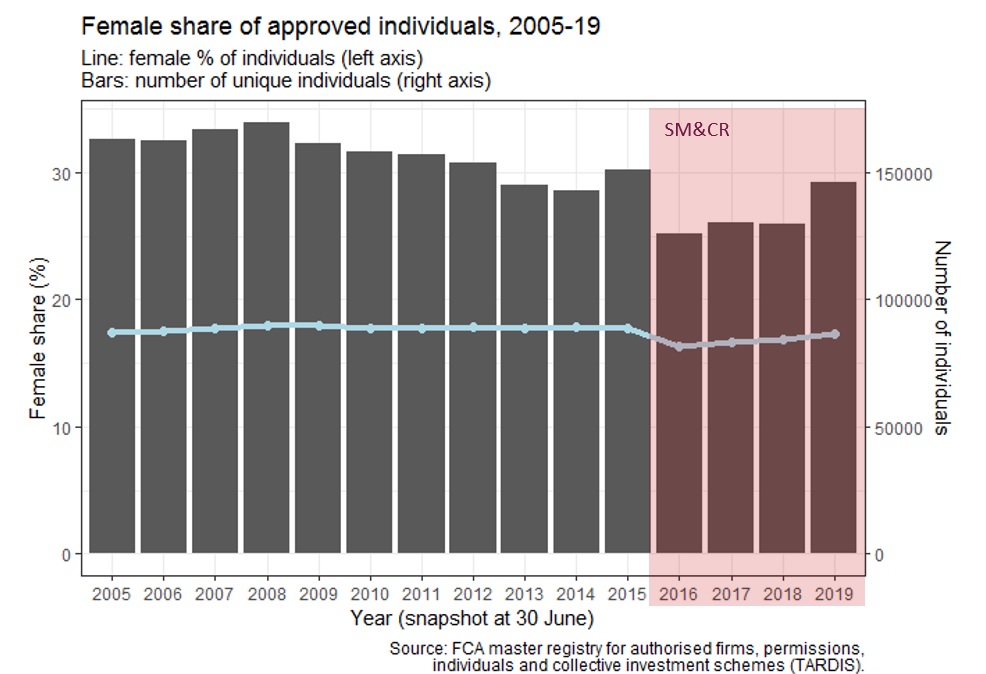 Regardless of this, overall diversity has remained essentially flat over time: the proportion of women in approved roles has barely changed since 2005.

Unpicking the headline stagnation, we do see some differences by type of firm and role.

First a comparison can be drawn between small and large firms, with small firms defined here as those regulated solely by the FCA and large defined as those that are dual-regulated by both the FCA and the Prudential Regulatory Authority.

We see that larger firms on average employ a higher proportion of women in approved roles: 23% compared to 17% at smaller firms.

The data also shows that on average the proportion of women is higher in senior management roles than in client-facing roles - this holds true regardless of the size of the firms.

Again, change in the proportion of women in these roles over time has been minimal. We see some exceptions to this rule in major groups – firms that are typically large and identified by the FCA as priorities for supervision.

Little has changed on gender diversity in the past 15 years

A closer look at a sample of major institutions

FCA data on approved roles reflects the functions performed by those individuals and is naturally grouped according to a specific operating entity and the services it provides – a wealth management business or brokerage, for example.

Many of these are not stand-alone entities, rather divisions or subsidiaries of larger parent groups.

It is possible to group these entities under their known parent firms, in effect reconstructing these larger groups and combining the gender diversity data of their different regulated business units.

By this method we built up a picture of 94 major institutions.

This sample may not be perfectly representative of the regulated activities that they are engaged in, or of the market as a whole. But they are typically large and important firms and, because of this, have been priorities for FCA supervision.

Major players – some progress but from a low base

Back in 2005 our sample group of major firms were markedly less gender diverse at senior management level than the industry average. More than three in four sampled firms had less than 15% of senior roles filled by women, and a quarter had less than 7%.

But by 2019, gender diversity had risen across sampled firms, with more than half now having female share above the industry average – a marked improvement over the starting point. It is worth noting that many of these firms are signatories to HM Treasury’s Women in Finance charter. 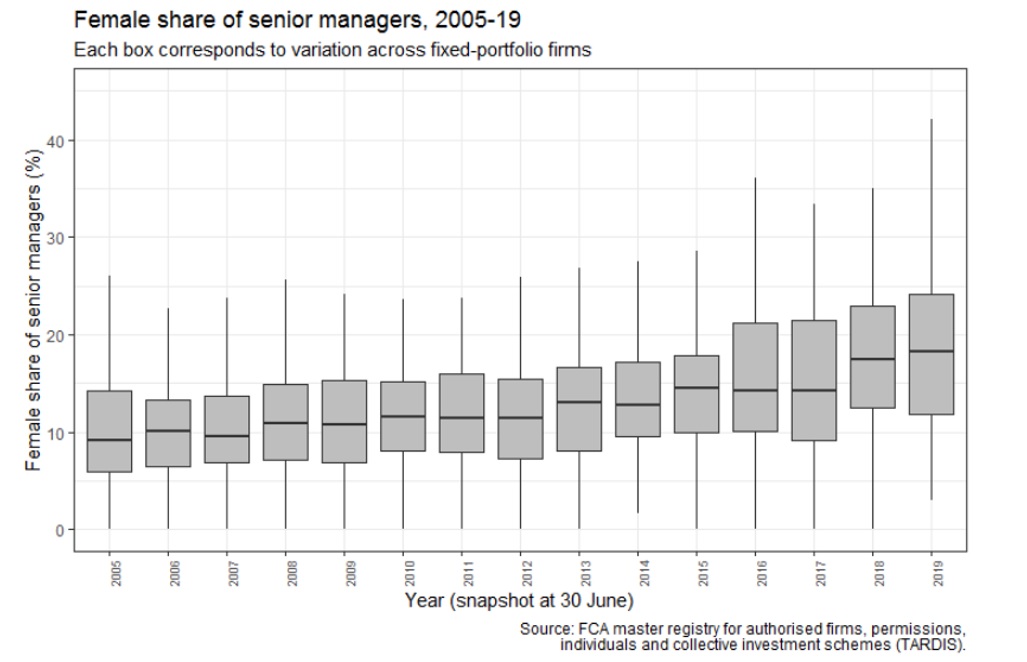 As ever the average for this group of major firms is only a top-line indicator and a double-click reveals significant variation. The sample includes 14 investment management firms and these stand out as a subgroup with more gender diversity at senior levels; women typically make up around 26% of senior managers.

At the other extreme lie brokerages (including small investment banks), where women typically account for just over 5% of senior managers. None of the ten brokerages in the sample had a proportion above 16%. 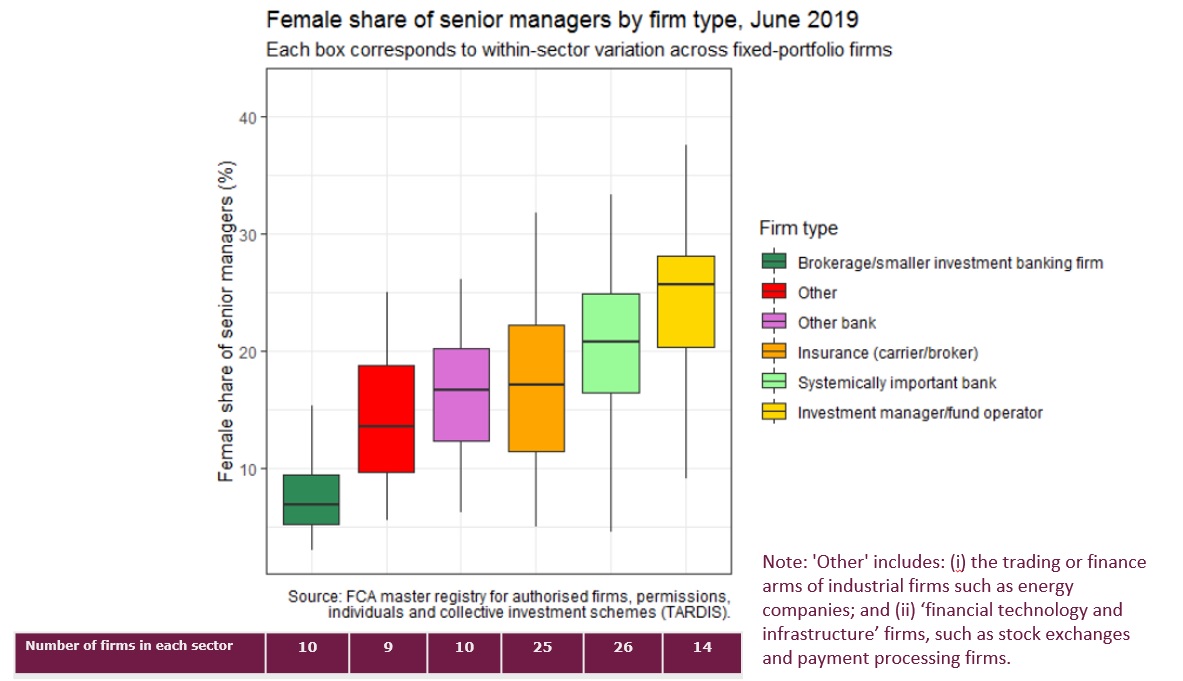 It is perhaps worth noting that some of the most prominent and conspicuously successful women in finance are wealth managers.

And brokerage trading floors also have their own cultural reputation.

While these observations may be anecdotal, they also chime with the analysis of the types of firms that have done most to improve their gender diversity.

If we look over the time period of our study, we find brokerages have seen a slight fall in the proportion of women holding senior manager roles (see graph below).

All other types of firms showed an improvement, most notably systemically important banks – which have been the firms most under regulatory and public scrutiny for their culture and diversity since the financial crisis. 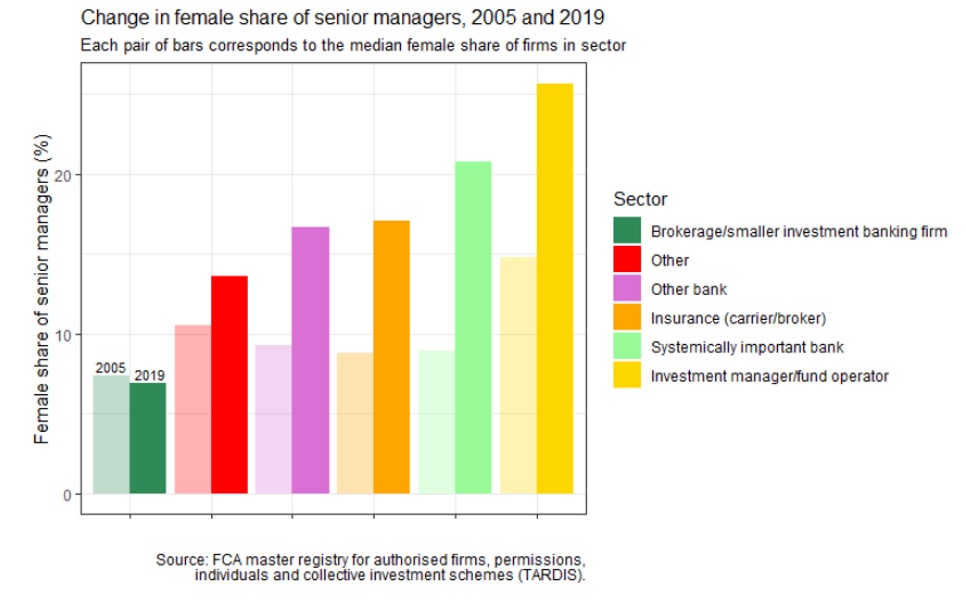 Our analysis appears to suggest that investment managers and systemically important banks are pretty gender diverse at higher levels. However, closer inspection reveals that the share of women is higher in non-executive roles than in executive functions (see next chart). This chimes with findings from the Treasury Select Committee’s 2018 Women in Finance report – and appears to hold for many major firms. 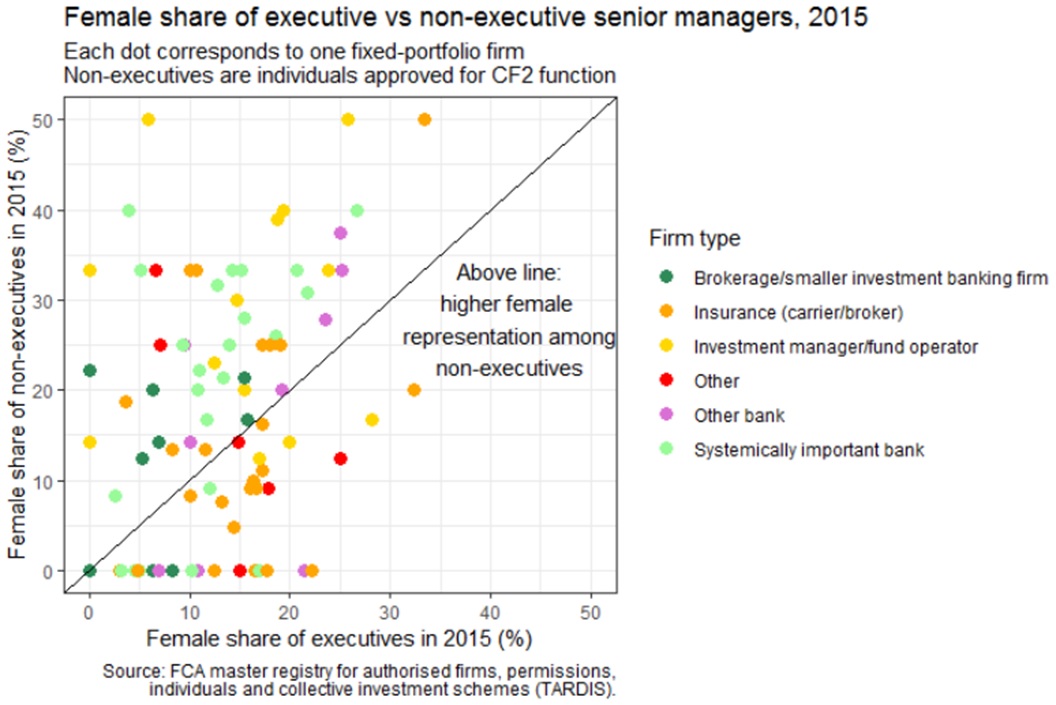 What can we make of the figures overall for this sample of major firms? Given that they are not necessarily representative of anything other than ‘firms that the FCA thinks are important’ we should be cautious about extrapolating too far.

But it does seem that as the financial crisis was brewing there were indeed few ‘Lehman Sisters’ – a point made by several critics at the time.

And as this research shows, whilst there have been gains in gender diversity in some areas, improvement has often come from a very low base and many firms and subsectors continue to lag behind on senior women; some have actually become less gender diverse not more. Even where women are found in senior roles the role is disproportionately likely to be a non-executive position rather than a critical decision-making role.

Overall then the picture is sobering: for all the rhetoric and conspicuous effort by some firms, the upper echelons of many financial services businesses remain as undiverse today as back in 2005. 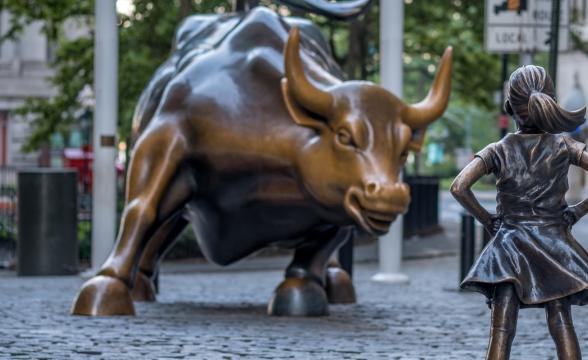 Behavioural science can tell us a lot about how humans are hardwired, and where efforts to improve diversity will be best spent. 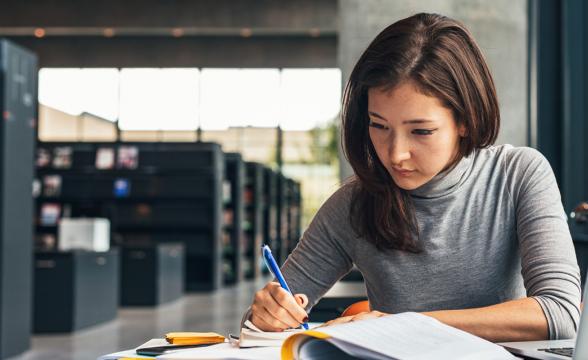